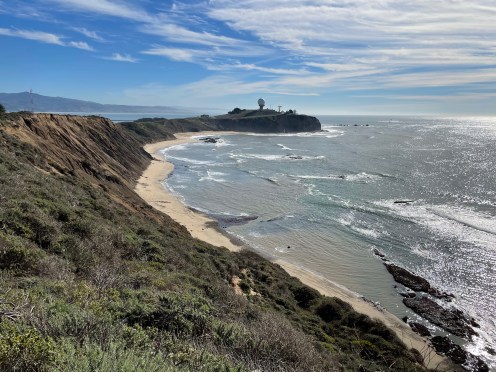 We’re staying about 20 minutes up the coast at an RV park in a town called Pacifica. The park is really just a massive paved parking lot and most of its campers are looking out the window at another RV parked right next door. We SCORED though and organized a front-row spot overlooking the ocean. Yay! I wouldn’t have stayed here but for the fact that Atlas had another pre-departure vet visit that we needed to do up in San Francisco and this was the closest to that that fit my criteria of scenic spot + hiking/walking right from the site.

I will say the sunsets were gorgeous and we enjoyed some short walks on the bluff-top footpath. Aside from that we had a great time, as always, hanging out together in the RV.

The absolute highlight though was that we drove down to Half Moon Bay to check-out Mavericks. The wave breaks nearly 1/4-mile off-shore and only when the swell gets to about 25 feet. When it’s working, big wave surfers from all-over the world flock here to surf it. A man named Twiggy rode a 50-foot wave here in 2014. Surprisingly that’s not the biggest wave ever ridden, an American rode a 78-foot wave at Nazare in Portugal in 2011. That’s just INSANE.

Unfortunately there was very little swell for our visit. Bummer! I had really been looking forward to seeing this place working. I was still stoked to be here though and discovered a really nice network of off-least doggy trails on the headland behind Pillar Point. I loved walking along looking at the point imagining what it would be like on a day that the surf hit just right and sent the waves soaring.

If you’re wondering what the thing is on the point that looks like a golf ball on a tee, it’s got a interesting story. The US Extraterrestrial Committee is expecting a giant alien species to invade the Earth and this is mankind’s gesture of hospitality to them. Kidding. Haha. Although if I were a giant alien this looks like a great spot for a driving range. No, so, currently it’s operated by the United States Air Force and used to track missiles and other air and space-borne devices. It was initially built though as part of the harbor defense for San Francisco in World War II over concerns the Japanese would attack the harbor.

I watched Chasing Mavericks again that night, for the surf footage of course.

Next stop… another famous surf spot.