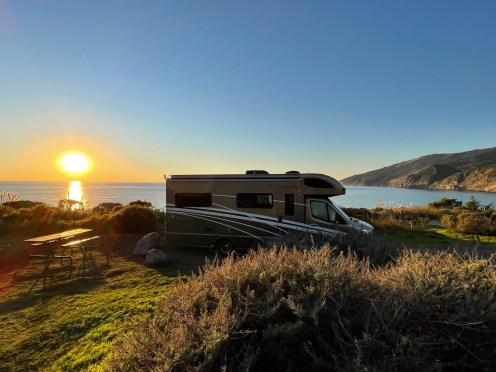 It doesn’t get more classic than this. I’m camped at Kirk Creek Campground in the Big Sur. The Big Sur is a rugged and remote 71-mile undeveloped stretch on the Central Coast and it’s absolutely gorgeous. The campground is perched on a bluff between the highway and the ocean. Wow!

I mean… look! Check out my neighbor! This spot is the one on magazine covers that has tugged at the heart string of wanderlust travelers for decades, inspiring them to throw it all in and hit the road in a van, eat brown rice and tofu and listen to the Eagles.

After leaving Santa Cruz we drove south around Monterey Bay and continued on to the Big Sur. I was excited to see the famous Bixby Bridge, that’s the bridge at the beginning of the HBO series Big Little Lies, but the fog was very dense when I drove by it and it wasn’t until I was about to drive onto it and saw the little sign that I realized i was there and had missed the viewing turnout. The fog burned off part way down the coast and made way to the big rugged views I had been hoping for.

I had a different campsite each night because this campground, like most along the coast in California, books out 6 months or so in advance and I’d lucked out a few days ago and gotten in on not one but two cancellations. Yippee.

The site on the first night had big views. It was incredible.

The site on the second night was right up along the cliff and had even better views. It also had a little pathway to a private sitting area on the cliff’s edge where we sat and stared some more at the view. Just for a change, and because it was easier with the way the traffic flow worked, I parked with my dining room window to the view.

Aside from sitting in the RV drooling at our view and taking waayyyy too many photos, we went for some hikes. There was a little trail down to the ocean, as well as a network of much longer trails on the other side of the highway that took off up into the Santa Lucia Mountains.

After leaving our incredible campground we continued on south down the Big Sur. The highlight was stopping at one of the few beaches along the coast, Sand Dollar Beach, and it happened to be dog friendly! Yay, Atlas.

The rest of the coastline was more of the same, which is to say more of the most rugged, curvy and super scenic coast to be found anywhere. I was really happy that we didn’t encounter any landslides; apparently they happen from time-to-time and a particularly bad one in 2018 shut the highway for more than a year!

Next stop… our last stop before we hit the more populated Southern California coast.