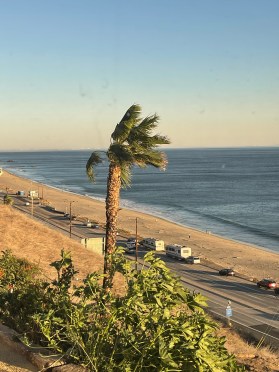 We’re in Malibu! Unfortunately the Santa Ana winds are here for a visit too. What a nutty couple of days!

Driving the coast from El Cap to Malibu was classic, passing through both Santa Barbara and Ventura and by surf breaks like Rincon. I’m sure Atlas and Millie are sick of the Beach Boys because I played them the whole drive here. But seriously, I feel like I’m at the beginning of a long line of breaks I’ll be hitting from the Surfin’ USA song.

Unfortunately we didn’t stop along the way but I slowed or pulled over briefly at some of the big sights. Driving with a baby is like that Sandra Bullock and Keanu Reeves movie, Speed, where the bus will blow up if it drops below 40mph, only in this movie it’s a baby that cries if the RV stops. I had a 2hr drive to do and trust me when I say it’s just easier not to stop along the way!

We’re staying at the Malibu Beach RV Park, it’s up on the hill overlooking Dan Blocker Beach, just north of the town. I’d booked us a front-row site and the view didn’t disappoint!

The Santa Ana winds are no joke! They blew in a few hours after we arrived and boy were they INTENSE. I’ve heard the Santa Ana winds referenced in movies but have never experienced them. They are strong, warm and dry, downdraft winds that originate in the desert to the east of Southern California and push out over the coast and to sea. They can happen between September and May and tend to last 1-2 days. I’m just thankful they arrived after we did so that we could be parked for the duration and not trying to travel.

Having worked in the ski industry for so long, wind events aren’t anything novel but then I’ve never parked an RV on top of the mountain during one either. I thought it was going to blow over with us in it. We were doing some SERIOUS and sustained rocking. I didn’t get much sleep that first night because I pretty much lay in bed all night googling “can a parked RV tip over in high winds” (yes, it can) and “how do I prevent my RV from tipping over in high wind?” I even got up in the middle of the night to move the RV to face a little more into the wind and put the slide-out in as much as possible to reduce the wind resistance we were causing. Oh and I topped off the water tank too, in case a few extra gallons would help us stay put.

Did you know that humans excrete large amounts of serotonin during a severe wind event? Serotonin affects the nervous system and exacerbates your tendencies, making people a little crazy. Or at least there’s a theory it does. I am a planner and so that explains why I sat up all night googling worst case scenarios and devising a course of action should any of them eventuate. I saw a lady the next morning that was just about manic; she was outside her RV shouting at her partner, demanding that he take her to a hotel immediately.

To make the crazy worse, the wind overnight had knocked out power to the entire Malibu area and by the time I left another 24 hours later, it still hadn’t been restored. Oh and it was Thanksgiving, so all those turkey feasts would have to wait!

I learned later that my good friend, Lee, had passed away that morning up in Montana. He lost his battle with glaucoma and ALS. Lee was our Budget Director at Snowbird for most of my years there and had retired a few years earlier. I know Lee would be amused that I now think of him riding the wind out to sea as if it were a giant wave, wooping and chuckling as he passes overhead, circling back when he sees my RV to hit it one more time with a really good gust and then carrying on out to the Pacific Ocean. If you knew Lee, you can imagine his chuckling. In all seriousness though, Lee’s death hit me hard as we were good pals. He leaves behind his wife, Sarah, and two grown boys, Scott and Jay. Lee was so excited for all the retirement adventures they would have together. Life isn’t fair sometimes. We miss you down here, Lee.

Despite the storm, we still managed to get in a good long hike up adjacent Corral Canyon each day. I guess I’m not just a planner but a hiker. Haha. There definitely wasn’t anyone else out hiking so it was great to have the trail to ourselves. Luckily most parts of the hike were sheltered from the belting winds a little and so while it was very windy I wasn’t worried about us getting blown off the trail. In full disclosure, I may not have gone hiking except that we were on Operation Exhaust Atlas. My boy needs to catch a flight to Australia in less than a week and I wanted him to be so tired he would be happy to get in his kennel to rest.

Aside from getting pelted by the wind and wearing out Atlas, we pretty much hung out in the RV. There was a great little fish shop below the RV Park that has a reputation for delicious fish & chips and so we did that for dinner on our first night. I’d bought some deli-case Thanksgiving-themed food from Whole Foods in Malibu the day we arrived and so despite the power outage I still got to eat turkey and pecan pie for Thanksgiving. We actually had it pretty easy during the power outage because an RV is built to live off the grid for at least a few days. I still got to use my air conditioner, microwave and coffee maker. With nothing much else to do I watched a couple of SoCal-set surf movies while Millie was napping. It was fun seeing the breaks on the big screen at the same time as visiting them. I’d passed by Rincon yesterday and San Onofre, Swamis and some other classics were coming up in the next few days.