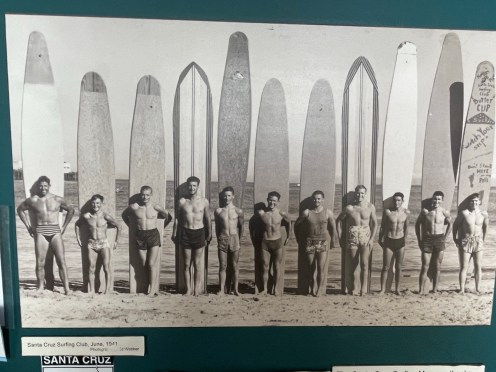 Do you ever get a bit star-struck when you meet someone really famous and not really know how to act? Well, I felt that way meeting the town of Santa Cruz. This is the birthplace of surfing on mainland USA and so much history has happened everywhere here, it felt preeettty rad!

The star-struck thing happened to me once when Richard Branson rolled his yoga mat out next to me. There I was a few feet from one of the most incredible business people and inspiring adventurers of our time and you know what words I managed to string together after class? “You should check out the steam-room here, it’s really nice“. What???

In 1885, a few princes from Hawaii were visiting California and made some planks out of a redwood tree. They were missing their favorite island past-time, surfing. It was the first time anyone had surfed in the USA. Some locals were watching and the seed was planted.

We started our visit at Steamer Lane, it’s a famous surf break and has been at the center of the town’s surf culture since the 1930s. The surf leash and neoprene wetsuit were invented here; it’s home to world class surf contests; and its waters have raised some of the best surfers in history. I was bummed that the surf wasn’t really working but there was a little wave and a couple of guys out, so we sat and watched for a while. While we were here we visited the Surfer Statue and had a great time taking in all the history at the Surfing Museum.

I thought of my friend Liam Fitzgerald because he’d told me stories of when he lived and surfed here back in the 60s. Liam had a long and successful snow safety career in the ski world; he cut his teeth in Squaw Valley and went on to run the Snowbird avalanche program for nearly 30 years and eventually retired another nearly 20 years as the lead forecaster and avalanche mitigation guy for Utah Department of Transportation. He was next-gen Monty Atwater, which is pretty much saying he’s god status in the avalanche ranger world. But before all of that… he was a dirt-bag surfer.

I got to know Liam well as we were neighbors in Snowbird’s employee housing. He had long been a mountain man by the time I met him, but the surfboard hanging from the ceiling hinted at a previous life lived. I loved hearing his Santa Cruz stories. We were sitting out the front one day yacking and realized the snowbank on our front yard was starting to form into a nice looking wave, so we decided to have some fun with it on my hallway mat. Haha.

Atlas’ favorite part of town was the doggy beach just north of the lighthouse. Dogs everywhere! Tennis balls flying! Atlas was in heaven overload and made tons of new friends.

We grabbed some tacos at a kiosk nearby and Millie read up on the local surf culture.

We stayed north of town the first night, at North Santa Cruz/ Costanoa KOA. It’s definitely the fanciest RV park I’ve seen in my travels, with lovely grounds and its very own grocery store and restaurant. We walked down to the beach for sunset, or as close as we could get to it with Atlas in tow and the beach being no-dog.

The next couple of nights we stayed south of town at New Brighton State Beach campground. It was gorgeous. I actually had reservations at a place in Carmel an hour south but I saw that a bluff-front spot opened up here last minute and decided to take it instead.

We did a couple of really nice long walks on the beach here, and of course Millie spent the rest of her time harassing her big brother.

The location was incredible but even better was the wildlife we saw! I looked out the window at sunrise and saw 3 bobcats playing along the top of the bluff! Wow!!!

Next stop… we could be on the cover of an RV magazine!