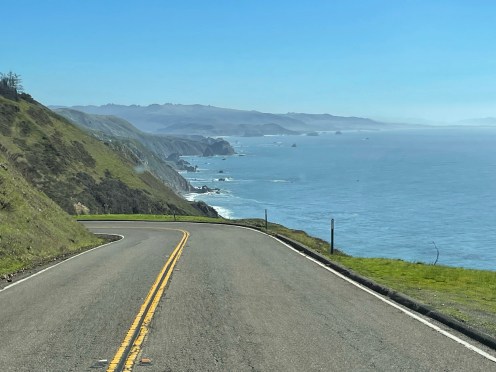 We drove south from Westport and spent part of the week at the tiny village of Anchor Bay and the rest at the bustling fishing town of Bodega Bay.

The Anchor Bay Campground is nestled in a narrow forested gully below the village. We got a site a couple of spots back from the ocean.

The drive getting here from Westport was very scenic. Atlas was happy to be done with it though, he definitely isn’t a fan of the curvy roads along this coast. Happily, we’re back to our routine of only needing to drive 2-3 hours to our next stop and so Millie did her usual long nap while we drove, what an angel-baby!

I was SO EXCITED to get here because we were meeting my good friend, Kristen, for a couple of nights. Kristen, you may remember, I talked about in my Dumont Lake, Colorado post because we met when we were both working at Steamboat Ski Resort back at the turn of the century (yep, wow, when did we get old?). We last saw Kristen in Salt Lake for Millie’s birth back in May and I was so excited that she could come join us for a couple of days now and spend some time with us and little Millie! Yay.

Millie and I went out to greet Kristen when she arrived and Kristen gave Millie such an excited greeting that she got a bit stunned and burst our crying. Haha poor Millie, and Kristen. Atlas was also very excited to see his pal and gave her tons of kisses, which is nice because it made up for Millie’s cold shoulder! Ha.

I had picked this spot because it’s right on a 1/4-mile private beach and I was really looking forward to lots of walks on the beach for all of us. Unfortunately, we were here during a rough storm and there was pretty much no beach, except a small one at the very lowest of tides.

It also rained a lot of the time too, thank goodness Kristen was here to entertain us all! Millie especially loved the Cards Against Humanity games; Atlas LOVED chasing balls in the very very wet sand outside the RV and I loved catching up with Kristen in slightly less crazy times (Millie’s birth was the last). Thanks Kristen so much for coming to stay with us for a couple of nights! Going to miss yooouuuuu!

Thankfully, it didn’t rain the whole time and so we did get some time to get out and walk on what beach there was and go up to the village. We were both surprised and happy to see a really well stocked grocery store and fantastic Thai restaurant, which we ate from both nights. I love Thai food!

We said farewell to Kristen and she headed back home to Sacramento and we moved on to Bodega Bay the next morning. It was another very very curvy but incredibly scenic road between the two; the road is literally cut into the cliff face for some of it and the rest winds its way through coastal farmland. I really thought that this stretch of coast would be more developed being so close to San Francisco, I definitely wasn’t expecting sleepy fishing towns and farmland right to the sea. What a treat!

Bodega Bay is a pretty busy fishing and tourist bay and the first town most people hit on Highway 1 headed north from San Francisco. We stayed at an RV park right in the marina. It was a bustling marina and it was fun to watch the boats coming and going. Atlas was especially fond of watching the seals swimming around. We had a spot overlooking the bay on the first night and the marina the second.

There was also a fantastic seafood restaurant in the marina that I got take-out dinner from both nights we were there. They had a salmon dish that was out-of-this-world good. Fabulous wines too given we’re in Sonoma County. Yum!

Next stop… you’ll recognize it!

One thought on “Anchor Bay and Bodega Bay, Highway 1, California”