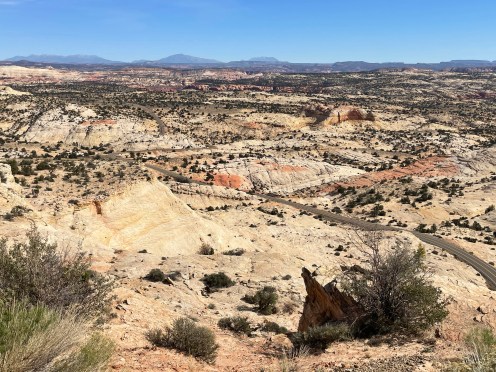 Ahhhhhh, Southern Utah in the fall, I’m pretty sure every muscle in my body relaxed (even more, haha) and my smile grew a little bigger when I brought the RV to a stop in a juniper forest in Grand Staircase- Escalante National Monument.

This National Monument is HUGE. Nearly 1.9 million acres huge. Our former President created outrage in the outdoor community in 2017 when he slashed its size by half to make way for mining, but thankfully President Biden returned it to its original footprint just recently. Hooray!!!

In fact, as I type I’m drinking from my March for Public Lands coffee mug that I got in 2017 when the Outdoor Retailer Tradeshow paused while everyone marched to the Capitol to voice support for keeping public lands public. Governor Herbert didn’t agree and as a result the Outdoor Retailer tradeshow, which had met in Salt Lake City for over 20 years, packed up and moved to Denver the next year. Taking with it 45 million in revenues.

I stayed on some Bureau of Land Management land outside of the town of Escalante off Hole In the Rock Road, being BLM it was free dispersed camping with no services but lots of space and raw nature, my kinda place.

We went into town, because it was just too cute not to, and to empty the tanks and refill the propane and water. Like so many of these Southern Utah towns, it is very small and quite basic but has started to sprout some great little shops and eateries. I love checking out these little places.

I wanted to do a classic hike while we were here. I’ve been here twice before and hiked Lower Calf Creek Falls, but at 7 miles round trip it felt a bit long to take Millie on. I found myself googling ‘easy scenic hikes in Escalante’ and when ‘family friendly’ and ‘short’ popped up in a Google search I readily clicked on it.

How times have changed! A few years ago I would have bought a map and looked for a 20-50 mile trail I could go hike for the weekend. Haha, I actually had bought the map but hadn’t gotten around to putting together a trip yet. I’ve done some fantastic backpacking adventures in Southern Utah nearby to here, two of my favorites being at nearby Capitol Reef National Park and Bryce Canyon National Park, Under the Rim Trail

Anyway, back to the family friendly short easy hike… we got a great hike in along the Fremont River Trail off Highway 12. It was a fantastic walk along a primitive sandy trail with lots of river crossings. Fun!

Millie babbled the WHOLE 2hr hike! It was hilarious. Occasionally she’d mix in some shrieks and chuckles in response to something her big brother, Atlas, was doing. I loved the river crossings because that was a first for her. She thought it was pretty funny that we were walking in the water. So fun! Sound on if you play the video…

Gosh, just the drive itself along Highway 12 between Escalante and Boulder was an epic experience. The road weaved through the contorted rocky jumble for 20 miles.

I know I’ve said this before, probably many times, but I am such a huge fan of the federal public land designations in the US. There really is something for everyone to enjoy! If you’re traveling by roads then the National Parks Service and Bureau of Land Management have paved some beautiful roads and scenic turnouts for you. If you like the wild, as I do, there are billions of acres of wilderness lands where any trace of man should be impermanent, so no roads, cars or even chainsaws. Want to hike with your dog? The National Parks are off limits. Heading out on your horse? You can venture anywhere. Like to fly a drone, you’re out of luck in National Parks and Wilderness (thank god) but head on over to some BLM and you’re all set. Then there’s a whole lot of State Parks splattered around too. When I hiked the CDT I had the incredible privilege to walk through 25 national forests, 21 wilderness areas, 3 national parks, 1 national monument and 8 BLM areas.

Aside from the Fremont River Trail hike, we did a lot of walks through the Juniper forest we were camped in. Happily Millie, who is Millie Juniper, liked playing with the Juniper branches, an improvement over her first encounter in Monument Valley!

One evening while out walking we were treated to the full moon rising, always such a special sight to see and one that reminds me how big the universe is and how fleeting our time here on Earth is. I recited some Macbeth to Millie because it seemed appropriate, you know the one… “out out, brief candle, life’s but a walking shadow, a poor player who struts and frets his hour upon the stage and then is heard no more. It is a tale told by an idiot, full of sound and fury, signifying nothing”. I memorized that for a grade 11 essay and for some reason can still recite it at the drop of a hat, or the rise of a full moon in this case.

Life being short, I’m so glad Millie, Atlas and I are doing this trip!

Next stop… you won’t even believe the view out my front door!