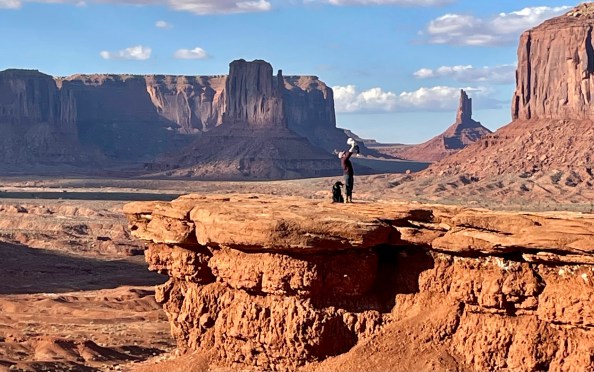 Cue Western Whistle, you know that theme music from every spaghetti western you’ve ever seen where there’s tumbleweed blowing down the main street and there’s two outlaws drawing their guns at each other while some weathered drunks and a scrawny dog watch on from the saloon doors? I felt like we were characters in a movie set the 3 days I spent in this strange and beautiful landscape.

I stayed at Goulding’s Campground up a little red rock canyon just outside of the valley. I scored a great site, it sat on its own and next to the wifi signal. I got a full hookup again so that I didn’t have to deal with a dump station with Millie, really love the convenience! Mostly my view was the red rock canyon wall but I could see a sliver of Monument Valley in the canyon opening which was pretty cool.

Monument Valley sits in the Navajo Nation Reservation and access is allowed at their discretion. The park has actually been closed for parts of the COVID pandemic and so I was happy to be able to visit this scenic and sacred land. The name in Navajo means valley of the rocks.

I hired a Navajo guide to take us through the valley. It was a fantastic tour. We saw all the famous monuments that have featured in films such as Thelma and Louise, Back to the Future III, The Eiger Sanction, How the West Was Won, Billy the Kid, Kit Carson, My Darling Clementine, Fort Apache, She Wore a Yellow Ribbon, The Searchers, The Trial of Billy Jack, Stagecoach and more…

We stopped a number of times along the way to get some photographs. When we stopped at John Ford’s Point I was still unstrapping Millie when the guide opened the back gate and Atlas jumped out. The second his paws touched the dirt he spotted a chicken, his first, and chased after it like he’s never run before. The whole parking lit, and the cute little ladies in the souvenir tents they lined it, stopped to watch and laugh at the show that Atlas and the chicken were putting on. When I realized what was happening I called him back and thankfully he returned immediately. Afterwards the guide told me that he didn’t like the lady who owned the chickens and he’d wished Atlas had caught it, haha.

There were some trails that left right from the campground and so we did some nice hikes while we were here. Millie, which is Millie Juniper, got to meet her namesake, the Juniper tree. I was so excited to show it to her but she burst into tears! Not what I was expecting. I think she’d been asleep and I startled her. Sorry Millie, but it’ll be a good story to tell you one day. As you know by now, I’ve been kind of obsessed with the Continental Divide the past 5 years, and given I decided to have Millie while I was on the trail I wanted something from the trail to be part of her name. I went back and forth over a few options and finally settled on Juniper, because I walked past so many of them in the New Mexico desert. I hope when she thinks of Juniper she feels empowered to go out and explore and experience this beautiful planet.

Aside from the tour and some hiking we did some much needed laundry, Millie played with her new jingle-socks, Atlas supervised Millie and of course, I watched Forrest Gump.

Next stop, one of the seven natural wonders of the world.