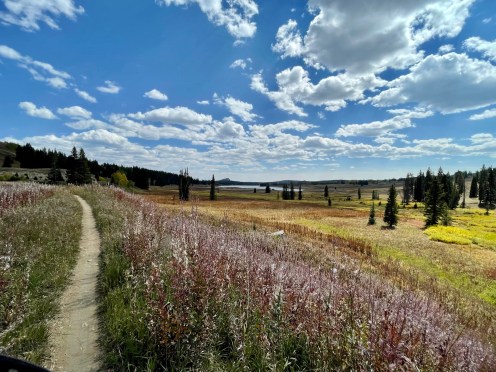 I got a great spot on Rabbit Ears Pass at Dumont Lake. The site was set back from the lake overlooking a large meadow of willows, brush and pine trees. Really peaceful spot in a small and well spaced-out Forest Service campground.

Our morning routine was pretty great. We’d sleep in until Millie stirred, usually around sunrise or 7 a.m. She’s cute all the time, but she’s especially cute when she wakes up because she starts babbling and stretching her arms and legs, then when I go over to her she puts on the biggest, most adorably cute, grin. My favorite part of every day! Then I get her out of her bassinet and bring her into bed with me and feed her while Atlas and I watch the sun’s rays fill the meadow. It’s such a wonderful start to the day!

We got a good walk in each day because the Continental Divide Trail comes straight into the campground! I actually walked right through here when I hiked the CDT; it was the end of the Rawlins to Steamboat section that I hiked in 2019 and the start of the Steamboat to Grand Lake section I hiked in 2016. It was fun to walk a short part of this trail with Millie and reminisce about the last time I passed along it. The Aspen trees were just starting to put on their fall display of color and Millie was mesmerized by the leaves, as was I.

I did a lot more reminiscing while I was there than just my CDT days; coming over Rabbit Ears Pass is something I first did in 1999 in a Greyhound bus. I was 19 year’s old and coming to work ‘just one season’ at Steamboat Ski Resort. Little did I know that I would stay not 1 season, but 5 and get completely hooked on the charm of the mountain town and buzz of working in the ski industry.

I started out wiping food trays at Thunderhead Cafeteria, at the top of the Gondola. By the end of that first season I had secured the highly coveted job of nighttime dishwasher at the Western BBQ, which meant I got to ski everyday and control the music for the kitchen at night, I recall both being a significant benefit. Can I tell you too, I actually really enjoyed the work? Something so satisfying about busting ass to keep the dirty side of the washer empty.

As the seasons passed I worked my way up to a server in that same restaurant. I loved working at the Western BBQ. Loved it. It was an all-you-can-eat BBQ buffet at the top of the gondola; my uniform was black jeans, a denim shirt and a cowgirl hat; Sundog, a live western band (the best in Steamboat), played the Chicken Dance (for guests) and I Hope You Dance (for me) every night; and last but certainly not least, I worked with a seriously fun group of people.

Our Western BBQ crew just really enjoyed spending time together. We watched the sunset over the Sleeping Giant and Steamboat Valley before the guests arrived and afterwards we often skied down from the peak with the light from our headlamps showing the way. The twinkling lights of downtown Steamboat far below was always my favorite part. We often skied down to Slopeside Bar or Tugboat and drank and partied on until the early hours of the morning. One particularly memorable evening we slid down the mountain on cafeteria trays and played drinking games in a mid-mountain teepee that the ski school used to entertain kids by day. It was really funny because at one point some of the snow cat drivers stopped by and joined in. Someone even turned up with a snowmobile and gave a few joy rides. I remember getting back to the base close to dawn, haha. Like i said, I worked with a seriously fun group of people.

It’s funny to look back at those early days of my ski industry career now. I have often joked that I could never have worked in resort leadership at Steamboat because we were just too naughty back in those early days. It did however give me an appreciation for some of the shenanigans our staff may have been getting into during the decade I sat on the Snowbird Senior Team.

By the time I finished working at Steamboat in 2004 I had also worked 2 years in the Ski School and passed my Level 1 and 2 Professional Ski Instructors of America certifications. I met a whole other group of seriously amazing people working in the ski school, my favorite of which was Jeanne Buck.

I remember riding the lift with Jeanne one afternoon and she told me about how she’d given up a Wall Street career at an accountancy firm to teach skiing. That conversation was transformative and played a big role in me giving up a legal career in Australia to work in the ski industry. It was just a couple of years later that I graduated from my law degree and celebrated by taking an Assistant Retail Manager job working for Bill Hoge at Snowbird. Thanks Jeanne, best chairlift ride ever! Here’s a photo of Jeanne and I catching up in Aspen a few years ago.

I could go on reminiscing for hours about all the fun I had at Steamboat. I really loved the 5 seasons I spent there and cherish the lifelong friendships I made. Who would have thought that more than 20 years later my best friend, and partner in crime, Kristen would have gone on to become a Labor & Delivery Nurse and was with me for my own delivery and kept be breathing and pushing while Millie made her way into the world. Here’s a then and now pic!

In one final trip down memory lane, Trish Sullivan came up from Steamboat to have dinner with me one night while I was at Dumont Lake. Thanks for the pizza, Trish! Trish gave me my first ski job! She hired me back in the summer of 1999 at a recruitment fair at my university in Australia. All the big US ski resorts were there hiring students to come and work the North American winter during our summer break. I remember hearing Trish talk about the western charm of the town and mountain and deciding it was definitely the resort for me. I remember calling Mum and Dad excitedly…”I’m going to work at Steamboat” and I remember them being a little hesitant about why I wanted to go and work on a steam boat. Haha.

Anyway, Trish and I have kept in touch over the years and so it was great that she could pop up after work to see Atlas, Millie and I. In fact if you’ve followed my blog, you’ll remember that Trish drove me to the start of my Rawlins to Steamboat segment of the CDT when I hiked it a couple of years ago. Unfortunately Millie had a meltdown at the end of our dinner, I think she got cold sitting outside the poor thing, so our conversation was cut a bit short, but thanks Trish so much for coming up… and hiring me all those years ago… and I hope you didn’t read that part above about skiing down at night or playing drinking games in the mid-mountain teepee. 🙂 Pic below of Trish and I, and an unhappy Millie, from earlier in the year when Trish visited us in Salt Lake.

The only bad thing that happened during my 3 days at Dumont Lake was that I couldn’t find the keys to the RV later that night after Trish visited. After searching high and low, and Trish doing the same when she got home, I still couldn’t find them. I was really hoping Trish had them because it also dawned on me that I’d taken out the pizza boxes and some trash after she had left… could i have tossed the keys out by mistake?

I went back up to the camp dumpster and studied it carefully with my headlamp; it looked like it had been emptied earlier that day because there wasn’t much in there. The good news is that this meant it wasn’t too gross inside. The bad news was that if I jumped in it was a pretty big leap to get back out again. Hmmmm. I looked back at the RV down the hill and thought of Millie, could you imagine if I got stuck in a trash dumpster and couldn’t get back to her?

I needed to enlist some help. Most of the campers had turned in for the night but there was a group of guys sitting around a campfire up the hill that I could hear. I walked up and said “hey fellas, ah, er, um, got a favor to ask, can one of you spot me while I jump in the dumpster?”. As it turns out I got in and out of the dumpster just fine, but it was really nice knowing I wouldn’t be stuck in there if I couldn’t get out! And guess what, no keys! After I got back to the RV, and gave myself a solid cleaning, I found the keys exactly where I’d left them, even though I’d checked there at least 3 times.

I had a good laugh about how stupid I am sometimes and looked at a sleeping Millie and whispered to her that I hoped she turned out smarter than her Mama!

Dumpster diving aside, I had a fantastic 3 days at Dumont Lake. Next stop Silverthorne, a couple of hours to my south.