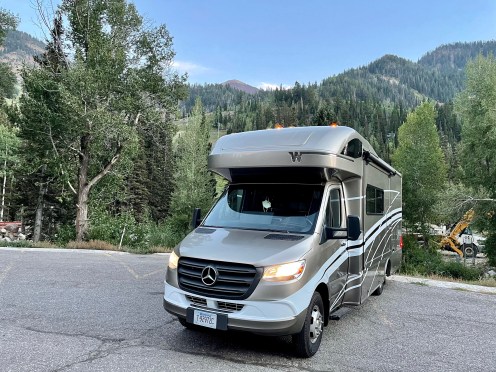 I’m back! Or should I say, we’re back! Atlas and I but also a new addition to the family, my 4-month old daughter, Millie. We’re setting off in an RV for 3 months to see the Western US.

If you’ve been following my blog then I owe you some updates because trading my 12-pound backpack for a 12-pound baby and a giant 25-foot RV is quite the change in adventure style. I mentioned in my Collegiate Peaks Wilderness (Twin Lakes, CO to Monarch Pass, CO) post that I had decided on what my new adventure in life would be after the CDT, but I didn’t disclose what it was. Well, it was sitting in a tent during a lightning storm on Colorado’s highest peak two years ago that I decided the next adventure wouldn’t be hiking the CDT again or some other trail, but having a baby. Suffice it to say that adding a 4-month old baby to my adventure posse has certainly changed my mode of adventure, but not cured the drive to explore and experience.

I’ve decided it’s finally time to move back to the Motherland, Australia. I’m excited for Millie to be closer to her Aussie family and to grow up in such a great part of the country. Byron Bay is home, google it and you’ll understand why I’m excited. I’ll be taking over the family business so Ma and Pa can actually retire too, running an accommodation resort on a farm in the Byron Hinterland. So many fun times to look forward to. But first… an epic road trip through the American West.

Snowbird had just thrown me a farewell party. It was a beautiful fall afternoon and I really enjoyed saying farewell to so many wonderful people i’ve worked with for so long. The ski industry attracts some of the most hardworking, dedicated and interesting people that you’ll ever meet. I’m so lucky to have been part of it and I shall miss it dearly. I may not miss the 4 a.m. phone calls notifying me that the road would shut for avalanche mitigation shortly, but almost everything else I shall miss and think of fondly. Thanks you guys for an incredible 17 years and a fun send-off party!

Nostalgic thoughts were soon halted however when Millie woke from her far too brief sleep and made it known to Atlas and I that she was not happy sitting in her car seat. So we pulled over near the mouth of the canyon and played with Millie another half hour until she was ready to go to bed for the night. It’s sure going to be interesting going on a road trip with a baby who doesn’t like to sit in her car seat unless she’s passed out asleep!

I was headed to Steamboat Lake in Northern Colorado for my first stop and had initially planned to only drive a couple of hours that night and drive the rest of the way the next day. Realizing Millie would never let me drive a few hours the next morning, I decided to just drive through the night and finally stopped for the night just outside of Craig, Colorado and within 1.5 hours of my destination.

I also realized quickly that travel times were going to be significantly longer in an RV, there’s no cruising along at 65-75 miles an hour in this thing, it’s 55-60 most of the time.

I was exhausted as I crawled into bed at 4 a.m. but so excited to be finally starting this journey. Here we go!

Thanks for reading. – Elevated

Ps. If you’re new to my blog, Elevated is my trail name as a long distance hiker. Seems appropriate to just adopt it as my nomadic traveler name, so I’ll keep it going.