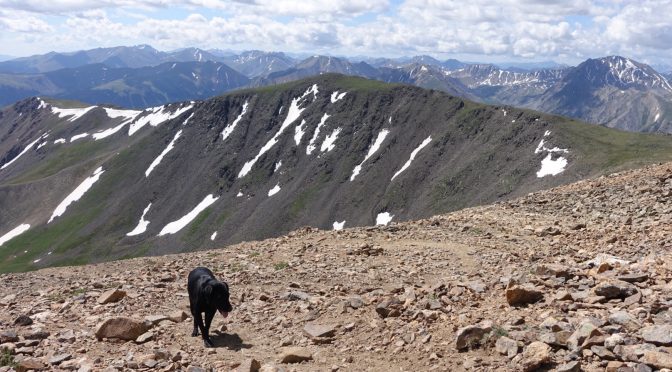 Another CDT section down. A spectacular detour up Mt Elbert. Atlas celebrates his 2nd birthday on Colorado’s highest peak. A BIG realization. A surprise rest day in Twin Lakes.

As i mentioned in my last post, the logistics around section-hiking vs thru-hiking the CDT are quite challenging, the chief of which is figuring out how to get to/from each end of the trail. Being a thru-hiker you just need to figure out how to get to the Canadian border and from the Mexican border and the rest takes care of itself because you’re hiking one segment after the other sequentially.

I drove from Salt Lake City to Colorado and stayed at Monarch Mountain Lodge, a hotel a few miles off the pass that I was planning to finish my hike at. They had agreed to let me leave my car there if I stayed the night. I arrived late Friday evening and organized for a Salida taxi service to pick me up on Saturday morning and drive me 80 miles north to Tennessee Pass.

The plan worked out well and I was on the trail starting my hike at 10 a.m. It was great being at Tennessee Pass again; I came off the trail here in 2016 and skipped down to Wolf Creek pass to get out of the cold and snow I kept experiencing. When Atlas was a puppy I actually stopped by the trailhead with him to show him where we’d hike someday. I love looking at before and after pics of Atlas, here he is in April 2018 vs now!

The Colorado Trail and CDT share the same trail through this section of Colorado. The CT runs just under 600 miles from Denver to Durango.  It’s obviously a much more heavily trafficked trail than much of the rest of the CDT given the high quality of both the signage and trail itself.

Much of the trail today was through pine forests but it also took  us up and through part of the Holy Cross Wilderness which was really pretty. Late afternoon brought thunderstorms, as is customary this time of year in the Rockies. Happily I was below tree-line by then and felt relatively safe in my travels.

Near Timberline Lake TH to base of Mt Elbert

It rained ALL DAY today. It was cold and wet and I spent much of it passing through the pine forests of the Mount Massive Wilderness. That’s all that I have to say about today.

I set my tent up a little over a mile up from the Mt Elbert North Route TH at about 10,200 ft. Atlas and I happy to call it an early day and be out of the rain.

One significant thing did happen today once we setup the tent though. I was looking at the remaining trail I have yet to hike to have finished the CDT. I’ve now done all of the CDT in Montana, Wyoming and New Mexico, with just here to Wolf Creek Pass near Pagosa Springs to go in Colorado. It hit me that if I walk the Creede route through the San Juans that I could have the trail finished this summer if I could carve out just one more week away from work. The long route through the north San Juans is 270 miles but the Creede route is only 140… I could knock that out in 8 days or so! I could do that this, this summer!

I woke to a clap of thunder at 4 a.m., evidently the only thunderstorm in the entire western US was happening just to my west and moving in. What are the chances of that? I was hoping to get up at 4:30 and be walking by 5:30 but with the storm brewing we stayed in the tent until it had passed. Luckily it moved on quickly and we were walking by 6:30 under clear skies.

The summit of Elbert at 14,439 ft is Colorado’s highest peak. I wanted to ascend the 4200 ft and get back below tree-line at around 11,500 ft again before any storms rolled in, hence the desire for an early start. It was quite the hike, very steep in parts with multiple false summits, but nothing technical. It was classic Colorado 14’er with a steady stream of hikers making their way up the slope.

As we plodded our way to the summit I pondered the prospect of finishing, yes FINISHING the CDT this summer. For 5 years the CDT has preoccupied my mind and dictated much of my vacation time. Then it hit me, if i did finish the CDT, what was next? What could possibly be the next big adventure that could hold a candle to what it has been like to hike this great trail? That pretty much captured my mind’s thoughts for the rest of this stretch of trail to Monarch Pass. What a big decision! What an incredible opportunity at a new focus. What should we do, Atlas?

The summit views were everything I’d hoped they would be: expansive, impressive and breathtaking. I’d taken a detour from the CDT to hike Mt Elbert and I wasn’t disappointed, well worth the 10-mile detour!

It was a special day to be on a summit because it was Atlas’ second birthday! This little guy has brought so much happiness into my world and I just love these adventures we get to go on together. Last year we celebrated his first birthday on Texas Pass in the Wind River Range. As i had last year, i carried a happy birthday cookie to the summit for him to celebrate. He seemed to enjoy it and all of the other summit goers thought it was pretty cool and gave him plenty of happy birthday pats.

The 5200 ft descent felt long because my knee, which has plagued me on and off this whole CDT quest, had been agitated since the first afternoon on the trail this segment. I made my way down though, finding ways of moving that didn’t aggravate it too much. Darn knee.

We made it down into the tiny town of Twin Lakes by about 4 p.m. What a cute little town. I had another surprise lined up for Atlas, I’d booked him a cabin in town for his bday! Atlas likes these adventures, but after a few days he gets pretty tired and I thought it’d be nice for him to sleep in a cabin away from the forest noises so he could really get a good night’s sleep.

We checked into the cabin and Atlas wasted no time jumping up on the bed and settling in. I left him and went for a walk next door to check out the little general store. It had a pretty good selection of all sorts of goodies. It also had my resupply package that I’d mailed there in advance with all of my and Atlas’ supplies for the next stretch of trail down to Monarch Pass.

The cabin was so comfy and the town so cute that I decided to keep it for an extra night and take a rest day in Twin Lakes. Love town days, especially in cute little Colorado mountain towns.

Atlas pretty much spent the day sleeping. I checked out the little town, which really meant its art gallery and mining history museum, and then spent the afternoon repacking my pack for the next stretch of trail down to Monarch Pass. If you look closely in the pics, you can even catch a shot of Atlas having a lazy afternoon watching Dirty Dancing on the little TV in the cabin.

One thought on “Tennessee Pass, CO to Twin Lakes, CO”