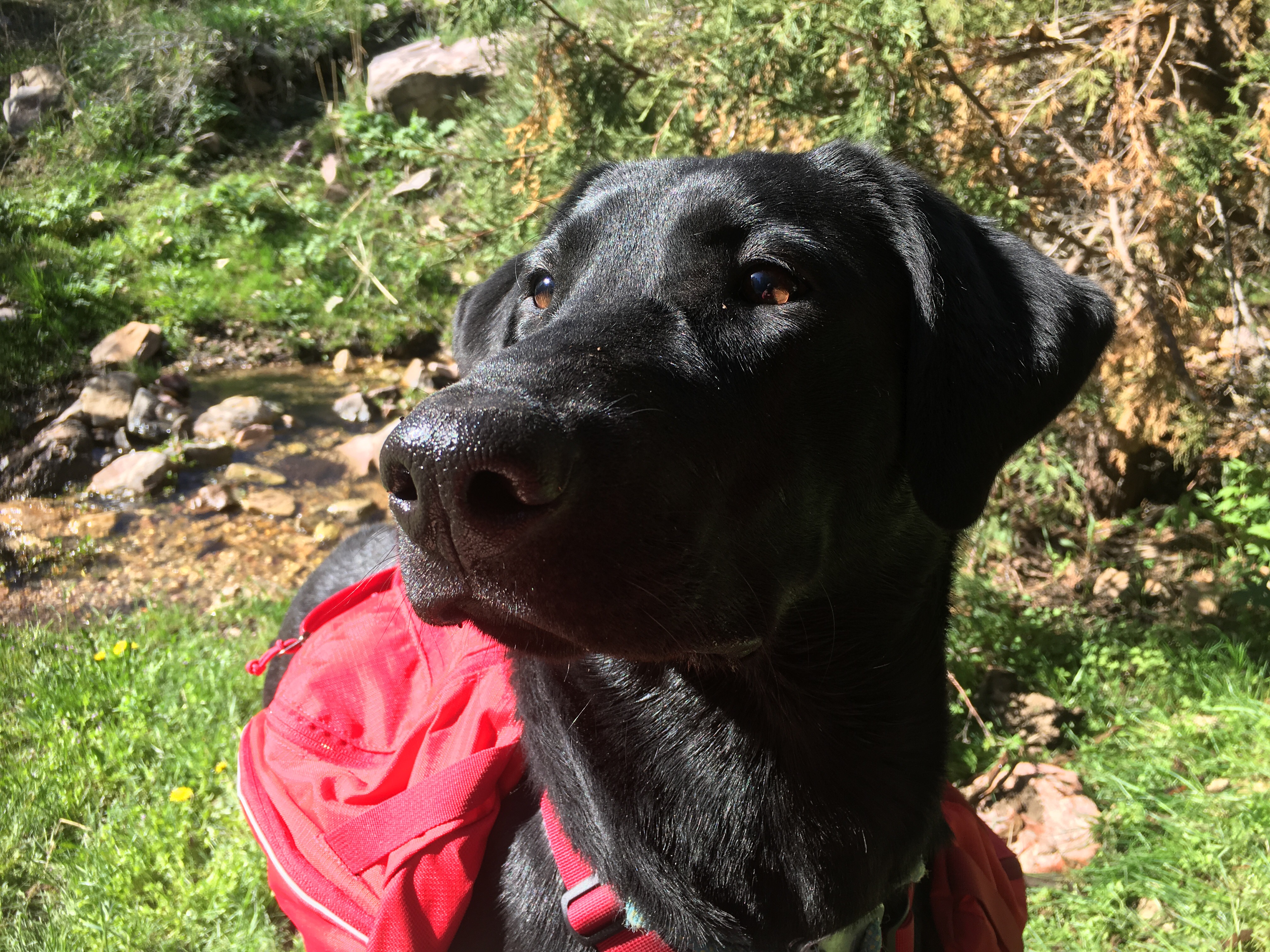 Atlas’ first backpacking trip! A look back at his first 8 months of socialization and training. Summer is coming and we have lots of adventures planned. Warning, cute picture overload!

Driving out of Salt Lake City to the Stansbury Mountains I was as excited as I’ve ever been to go on an overnight backpacking trip. Atlas was in the backseat and his little puppy-brain had no idea what it was about to experience.

Taking the South Willow Canyon road, I drove to the north end of the Stansbury Front Trailhead. If you’re reading this post for trail recon, I’ve got detailed info in my Stansbury Front Trail  post from when I hiked the whole SFT a couple of years ago. The only thing i’d add to that post is that on this trip (a month earlier than last time), I found a couple of good water sources (a spring and a cattle trough) in the drainage to the north of Davenport Canyon.

We arrived at the Trailhead and I chuckled at Atlas’ face as I attached his hiking pack to him. He’d worn it a couple of times earlier in the week and given me the same sad ‘why are you punishing me’ face. He’s still very young, not quite 9 months, and his endurance is pretty limited; so I decided that he’d carry an empty pack, just to get the hang of wearing it but no so as to slow him down.

It was 7 p.m. when we hit the trail, which was perfect because it had been really hot earlier in the day. I smiled with pride as little Atlas trotted happily ahead of me. A little over 2 miles in we left the trail and found a great place to call home for the night.

Apparently Atlas hadn’t had enough exercise because he was running around camp like a crazy boy, if I left anything unattended he’d snatch it and run around with it. How am I supposed to get camp setup with Atlas in crazy-boy mode? I was hopeful he’d be tired from the hike and would just chill-out while I got things setup, but no such luck. I felt immensely guilty as I tied him to a nearby shrub. I was happy I’d packed in a short leash.

My new tarp-tent arrived in the mail just the day before, so I was excited to get it setup and check it out. It’s a Zpacks Duplex the 2 person version of my solo tarp-tent that I’ve used the past few years. It was everything I hoped for, at 21 ounces it’s still an ultralight shelter and for just 5.5 ounces more than my normal one, it gives Atlas and I a really roomy home. I love it!  I got everything setup inside, including Atlas’ insulated doggy mat and doggy sleeping bag. So cute!

I let Atlas off and sat down on a nearby rock to eat dinner. Luckily he’d mellowed out a little. We watched the last of the sun’s light leave the sky and climbed into the tent. I had the storm doors open and so there was a clear view of the nearly full moon and lights of Tooele valley below. Atlas sat upright and listened intently, his head jerking left to right as he tried to keep up with the nighttime sounds. Then the wind picked up, and by picked up it I mean gusts to 45 miles per hour. My new tent did great, but poor Mr Atlas was wondering what on earth was going on, his little puppy-brain trying to figure out why the 2 of us were in this flapping structure in the middle of no-where.

We did manage to get a little sleep, but Atlas kept moving about and made getting more than an hour’s sleep at a time difficult. By the time 5:30 a.m. rolled around we were both ready to get up and get going. I let Atlas out of the tent to let him run around and I packed up the tent as the sunrise moved from nautical twilight to civil twilight to daylight. It was a beautiful morning watching the sun rise over the Great Salt Lake, Tooele valley and the Stansbury Mtns. I was excited to snap this great pic of Atlas watching the sunrise:

With Atlas still being really young, I couldn’t take him far so we walked another couple of miles south before turning around and walking back past where we’d camped and to the car. The highlight for Mr Atlas was a cattle trough along the way that I’d stopped at to refill my water bottles, Atlas had other plans for the water:

The highlight along the way for me were the views out over the Great Salt Lake, the beginning of some wildflowers springing up and being back on the trail with my pack on, with little Atlas in tow.

My life changed forever last October when I adopted Atlas. I chose to purchase a puppy from a reputable breeder in Colorado because I wanted to adopt a puppy and have the chance to be the one to shape his experiences.

I drove 9 hours to north-east Colorado to pick-up the young lad. The breeders, STK Just Labs, put me in a room with 5 of the male puppies and allotted me an hour to pick my 4 legged child and new best friend. It was a feeding frenzy of puppy kisses, shoe lace chewing, toy throwing and excited yipping…. how to pick just one! Atlas came up to say hello with all the puppies, then trotted off to explore the room while intermittently coming back to say hello; an independent soul, I liked that. He was a tad less crazy than all of the others and I fell in love with him instantly. All of the other puppies were removed and I got to play with him for a while longer, running through all of the recommended puppy picking tests like making a loud noise, suspending him in the air, etc. Beautiful temperament, curious, mellow… and a total hottie. I picked him up and loaded him into his new crate in my car, where he slept for most of the drive home to Utah.

I had a few names in mind but wanted to meet my new boy before naming him. About an hour into the drive home I settled on Atlas. Atlas is the Titan God of Endurance and he was an expert navigator, an apt name for a future thru-hiker. Perfect fit.

Given Atlas has a life of hiking and adventures ahead of him, I figured it was fitting to give the lad his first walk away from his litter on the Continental Divide Trail where it crosses I-80 in Rawlins. He loved it, running around like a crazy boy and eating everything he could get his tiny mouth around, at least for 10 minutes before he collapsed in a pile and fell asleep.

In his first few months after coming home I did all of the usual socializing and training that most new doggy parents do, but I also made a point to do some hiking specific socializing: we visited farm animals, hiked on trails, walked across streams and bridges, learned to wear a doggie jacket and booties (and Halloween costume, that’s preparation for a doggy backpack, isn’t it?), and even went on our first camping trip.

His doggy-trainer, Michelle, is helping me with some hiking specific training too: teaching him which leg is which so if he gets in a difficult spot I can talk him through which leg to use; how to let me carry him incase he ever gets injured on the trail; how to heal off-leash and come when called immediately.

The Coming Adventures of Kate and Atlas…

Now that the snow is melting in the mountains and trails are slowly emerging, I plan to take Atlas on as many weekend backpacking trips as I can squeeze in. He’s still very young and I need to be careful not to over exercise him, so we’ll be doing some low mileage adventures this summer, perhaps with something a little longer in the fall. We hope to get in many Uinta Wilderness trips and possibly something in the Wind River Range or Colorado.

I’ve also made a point to take Atlas to the CDT any time I’m somewhere near it, I think he’s starting to get the hint. I plan to hike the whole thing again some day, and when I do Mr Atlas will be right there with me, although he won’t do some of the New Mexico desert and can’t do Glacier and Yellowstone National Parks. I have lots to learn about thru-hiking with a dog, but it’s been done before. I’m lucky to call Bright Eyes and her pup Sadie friends, they hiked the PCT and CDT together. Thru-hiking with Atlas will be so fun, I’m looking forward to our adventures together.