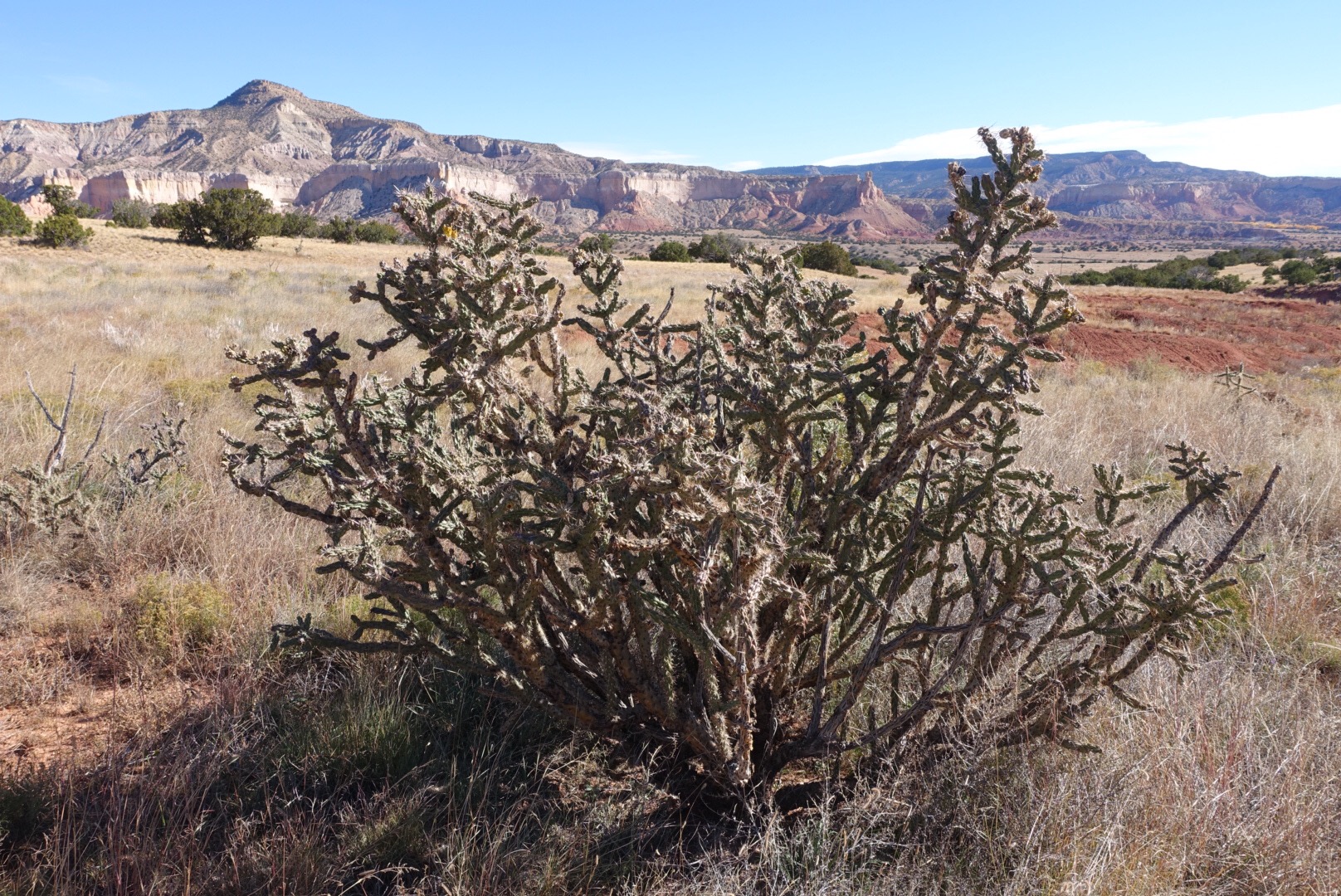 A short 50 mile stretch through the Rio Chama and San Pedro Wilderness areas. My first tarantula. A serene morning camped in a meadow. Do they breed dinosaurs in Cuba?

I ate lunch in the cafeteria with Holden, Bubbles and Tugboat and was on-trail by about 9:30 a.m. The CDT followed the horse trail i’d ridden along yesterday for the first quarter mile. I miss my Dusty! Side note, the internet connection in Cuba wasn’t awesome and I had a hard time uploading some of the Ghost Ranch pics to the last blog, I’ve fixed that now if you’re interested in going back to the last post to see them. Anyway, so down the trail I went, on 2 legs not 4 today.

After a few miles of hiking across the southern side of Ghost Ranch the trail crossed a highway and that’s the last I saw of a trail for a couple of miles. Argh, CDT, how you frustrate me when you don’t actually exist other than as a line on my map. Every now and then i’d see a cairn to indicate the way, but it was a slow couple of miles of hide-and-seek with the ‘trail’.

As you are aware, there’s not much I dislike more than road-walking, but when the non-existent trail merged with a gravel road I was happy for the improved hiking conditions. I was about 3 miles into the 7 mile road-walk when a truck came along and stopped to chat as he passed. He offered me a ride to Skull Bridge and I jumped in, my feet happy to be done with the repetition of road-walking.

The drive was really pretty as it followed the Rio Chama up a picturesque winding canyon. The Rio Chama is the last major water source I’ll see on the CDT, and is a major tributary to the Rio Grande River. I sat on a rock by the river eating a snack, soaking up the warm sun and taking in the scenery.

The trail picked up on the other side of Skull Bridge, entered the Rio Chama Wilderness and headed into Ojitos Canyon, a tight little canyon with a spring running down the middle of it. I ate lunch by the spring and stocked up on water, my next water source being another 20 or so miles away.

I set-up camp for the night on the south side of Mesa del Camino. Now that i’m in the New Mexico desert the water sources are few and far between, and so they’re heavily visited by all kinds of animals, including the occasional thru-hiker. Because of this, I try not to camp too close to the water sources, I love the sounds of my animal neighbors out here, but I don’t need them walking through my camp all night.

The day started with a  6 mile descent from the mesa into a valley and crossed Highway 96. My CDT map had this to say of Highway 96 ‘General note: Be careful of sketch individuals at trailheads along Hwy 96…drug deals, etc’. Happily Holden and Bubbles came cruising down the trail just before the highway crossing and the only sketchy individuals around were the 3 of us. Ha. Well, I guess there was a big hairy tarantula spider on the trail too, he was a little creepy.

We walked and talked another couple of miles and then stopped for lunch. Holden’s mum had sent him a lifetime supply of gummy bears to Ghost Ranch and I gratefully pigged out on a quarter pound of them after finishing my very bland and boring Pro Bar. I’ve hiked most of this trail solo, so when I do spend a little time with other thru-hikers I realize how darn boring the contents of my food bag is! Thanks for the gummy bears guys!

I said farewell to Holden and Bubbles as they were pacing ahead of me. My achilles is still mildly bugging me and so I didn’t want to push it trying to keep up with them.

After lunch, the trail climbed about 3,000 ft over about 10 miles onto a mesa in the San Pedro Wilderness. I setup camp on a patch of dirt under a pine tree on the side of a big meadow. I fell asleep to elk bugling and coyotes yipping, as I have most nights for the past month or so.

What a fabulous morning. I poked my head out of my tent at dawn and found myself in one of the most serene settings I’ve ever been in. I’m not sure I can even describe it, but here goes: crisp still morning air; large meadow with a small stream meandering through the middle of it and pine trees framing its sides; a herd of elk drinking from one side of the stream; a flock of ravens feeding on something on the other, letting out the occasional group squawk. As the first rays of light filtered into the landscape the elk and ravens somehow took that as a cue to gradually retreat from the meadow into the anonymity of the pine forest, their retreat following the still shaded part of the meadow. As I walked out of camp the sun’s rays had filled the meadow and it had become… just a meadow again. That description doesn’t do this experience justice, I guess the point is simply that I had a very peaceful sunrise experience today.

The trail dropped into a canyon off the mesa and descended to the Los Pinos Trailhead. The rest of the day was an 8 mile progression of road-walking from rough dirt, to better dirt, to gravel, to pavement and eventually a highway as I walked into the town of Cuba. Noteable sights along the way: a very quirky driveway entrance and a weirdly oversized fence and accompanying gate that reminded me of Jurassic Park. Hot and with sore feet I arrived in town and went straight for a Mexican restaurant for a glass of icy water, a giant margarita and a delicious pork burrito. Yum!

I had to laugh at my legs when I pulled into town. As Top Shelf commented to the photo i posted on Facebook ‘Elevated, that’s like $20 worth of KT tape!’. KT tape mummy I may be, but it’s getting me through the miles!

Very nice people, but a super run-down and seedy town. That’s about all there is to say about Cuba, New Mexico. At least it had a little grocery store with some fruit for sale, some of the little towns when I was up in Idaho didn’t even have that. The highlight was probably taking my first shower in 10 days; I hadn’t showered at Ghost Ranch for fear that some of my KT tape leg masterpiece would come off and I didn’t have enough spare strips in my pack to replace them. I had a day of work calls lined up for Snowbird, so I stayed a day, but got out of there as soon as I could after that.