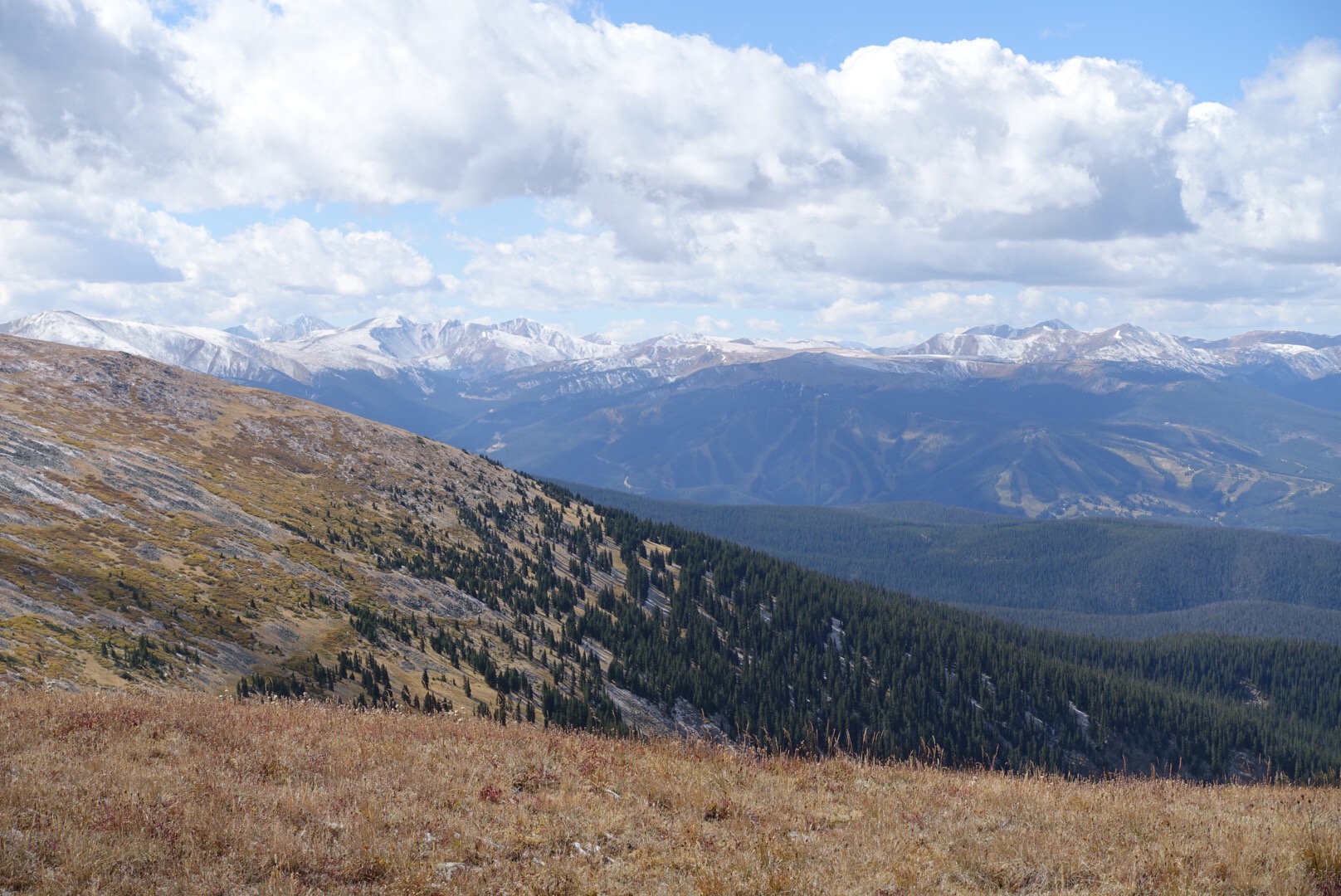 Lakeside hiking. Indian Peaks Wilderness and The High Lonesome Trail. Bailing from a snow storm down to Winter Park. This was a really short stretch…

I got a great sports massage from Anastasia at Sage in Grand Lake and rested my knee a little more before heading out of town at 4 p.m. My IT band and hamstring on the offending knee’s side were both extremely tight. She worked wonders on it. Hopefully that’s the cause of the knee issue I’ve developed recently. We’ll see.

The trail wandered around some streets in Grand Lake and then followed some very mellow terrain along the eastern shore of Shadow Mountain Lake. It was a really pretty afternoon, especially with some of the Aspen trees starting to turn a stunning fall gold.

I didn’t realize that this section of trail was still in RMNP, which requires a permit for camping. Oops. I found a stealth spot to camp in a forest overlooking the Colorado River as it passed between Shadow Mountain Lake and Lake Granby. There was a little sail boat anchored in the river bobbing up and down, it reminded me of my parents who are sailing the Whitsunday Islands right now. In fact, while i’m on that note, I’ve had Sloop John B stuck in my head the whole time they’ve been out there. Last trip i went on with them, Dad put the Beach Boys version of it on the boat’s speaker and sang it first thing in the morning to get everyone out of bed. For Mum’s sake I sure hope he’s changed that habit. It has been an odd song to have stuck in my head while hiking the backbone of the US continent.

My thoughts are with you, Mum!

The first 10 miles or so today meandered along northeast shore of the giant Lake Granby. Super pretty morning. Lots of expansive views over the lake.

The afternoon climbed up about 2,000ft from the valley floor at Monarch Lake into the Indian Peaks Wilderness. Nothing super scenic, just a long uphill climb through pine forests. I was thankful for the tree cover as it rained on and off all afternoon and there were thunder claps on the peaks above.

I set up camp at about 10,300ft. I ate dinner in bed, because it was pretty cold. Am I getting sick of mountain house dinners? I really had to force this one down, unless I wanted to carry it out and have my tent smell like Chicken, which I sure didn’t, I had to eat every last drop of it. Argh.

Weee, it was a cold one last night. I woke to a completely ice covered tent exterior. In fact the whole forest floor was glittering when I shone my headlamp over it.  I would have frozen in my tarp tent. I woke at 5 a.m. to get an early start because I had a 14 mile exposed ridge walk this morning and then a 13,300ft peak to summit at about mile 16.

I was walking at first light and noticed that it had snowed last night about 500ft above where I had camped and the taller peaks had a good coating on them. Hmmm. Good thing I got a pair of YakTrax in Grand Lake and was carrying them in my pack.

The first 4 miles were mostly downhill and flew by. I stopped before the climb up to the ridge to have my morning snack, fill up some water and dry my tent out a little in the sun. I was hoping to get up to the ridge and make good time along it to put me over James Peak Summit by early afternoon. A few things conspired against me though as I started the climb up to the ridge: there was no water for 15 miles so I was carrying a heavier than usual water load; I wanted to take it easy on my knee, although it’s feeling really good again and there was snow or mud on parts of the trail.

I stopped on the ridge above Rollins Pass and took stock of the situation. There were more storm clouds moving in, it was starting to snow lightly on me and I was still 6 miles from summiting a 13,300ft James Peak, which was another two thousand feet higher than where I was at that point. I sat down with my maps and looked at what options I had to get below tree line for the night and then resume in the morning. Then I pulled up a weather forecast which showed rain/snow and possible thunderstorms in the afternoon, and then rain/snow in the morning along with more possible thunderstorms, then the weather returns to mostly sunshine after that for the next bunch of days. I noticed a few cars parked at Rollins Pass and decided that I would try my chances at getting a hitch down to Winter Park and head into town for my resupply from here instead of Berthoud Pass as i’d planned tomorrow morning.

When I got down to the pass a guy got out of his truck and asked how the weather had looked over the ridgeline i’d just come off. He was a local guy up there to ski some snow in one of the couloirs, but he didn’t want to head up there with two pieces of metal strapped to his back if there was thunderstorm activity. He asked if I was hiking the CDT and where I was headed. I told him I’d just made the decision to bail down to Winter Park. He told me he wanted to give the weather another hour or so and that he’d pick me up if he saw me walking the road whenever it was that he did drive down.

Rollins Pass is an interesting place. According to the information at the pass, “John Quincy Adams Rollins established a toll wagon road through this pass in the mid 1860s. David Moffat’s Denver, Northwestern and Pacific Railway crossed the Continental Divide at this point in 1903. First known as Boulder Pass, then Rollins Pass, the railroad workers dubbed it “Corona”, the crown of the “Top of the world”. A railroad station, hotel, restaurant and workers quarters existed here until 1928 when the railroad was abandoned due to the building of the Moffat Tunnel”. I could see remnants of the old hotel foundations and some of the old railroad ties and the Rollins Pass road was certainly the grade of a railroad track.

I put on some John Denver as I started down the road, I got a laugh when the first song that played was ‘Sunshine on my Shoulders’ because it was windy, cold and snowing lightly. It was a pretty walk though with the resort of Winter Park facing me from across the valley. Last time I was at Winter Park I was mountain biking with the Snowbird crew, it was fun to see the mountain from this angle and guess at where we’d been riding. As I walked down the road I could see the High Lonesome Trail continuing along above me on the ridge, I felt a pang of regret regarding my decision, it would have been great to be hiking up there and not on this road.

After a few miles the skier guy came driving along and i jumped in, happily accepting the ride. I’m not sure how i’ll get back up here or if i’ll need to resume at Berthoud Pass where i’d planned to come off the trail tomorrow. We’ll see.

Winter Park is a busy tourist town on US40,  it thrives on tourism from nearby Denver and plenty of destination travelers also. The big draw is Winter Park Resort in the winter. The whole area has become a mountain biking mecca in the summer months too, including an industry leading downhill park at the resort, Trestle Bike Park.

Anastasia, my awesome massage therapist from Grand Lake, lives in town too. I got in touch and went over to her place for another epically awesome massage to continue loosening up these tight leg muscles. And being Colorado, instead of massage oil, it was CBD oil, a great anti-inflammatory extracted from the cannabis plant. It was great.  Thanks Anastasia! She moved here recently from Alaska and is settling into life in a Colorado ski town, we had a good time talking about life, adventures and small town ski resorts.

Quick stay in town, just enough time for resupply, laundry and massage, then back on the trail tomorrow morning. I’m really excited for this next stretch, some high and impressive trail ahead!