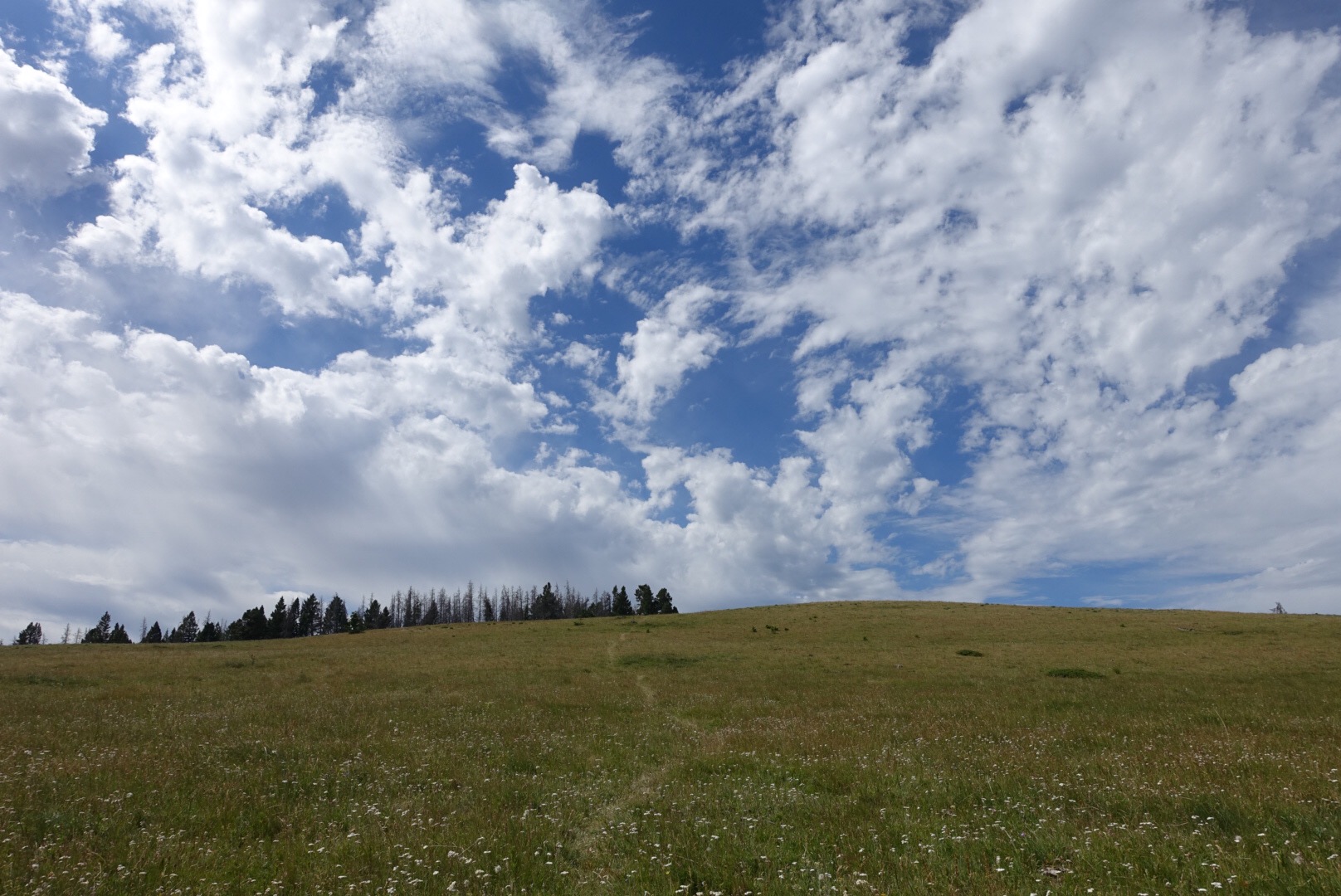 I’d organized for a ride to the Pass from a local guy for $20. Half Mile, Hobbs and I split the fare and we were happy to get an early start out of town at 7:15 a.m., because sometimes it takes a while. We swung by Fire Tower for one last latte and breakfast burrito to-go and I also got a sandwich to pack-in for lunch. I’m learning.

Hobbs was headed northbound, so we said farewell to him at the Pass. Knowing i’d be stopping to fiddle with my new shoes and shoe laces a thousand times a minute for the first few miles I wished Half Mile a happy day. It was a beautiful morning on the divide, there’s no doubt why they call Montana ‘Big Sky Country’, the blue seems more blue and the clouds, like the horizon, seem to stretch on forever and come in all kinds of interesting formations.

Just before lunch I was in the zone walking along a dirt road and came out of it to some kind of noise. What is that? Is it a bear (always my first instinct)? I did a 360 to scan my environment. Cruising down the trail towards me was a girl, “Hi! Hiiii! Hiiiiiii!”. It was Dora the Explorer, she’d friended me on facebook before the hike and I knew instantly it was her, it shouted back “Dora?!”. We stopped at the next water source, tanked up and ate lunch. My sandwich i’d carried in was totally delicious, turkey and salad on a walnut cranberry bread. Not that my lunch making skills leave anything to be desired, but it was pretty darn tasty!

I walked with Dora for a few hours to the next water source. When we got there we threw our packs in the middle of the trail, which happened to be a gravel road, filled up our bottles from a culvert and lay out on the road to rest up for a while. Out of no-where a car came flying down the hill towards us, “what the f%$k!?”, we hurled our gear and selves into the grass on the side of the road. Where did that come from? It’s funny that sometimes you feel more remote than you actually are out here. These hills outside of Helena seem to have a lot of private property within them. Not learning our lesson we sprawled ourselves out across the road again, within 5 minutes a semi-trailer came along. A semi! Geez, maybe not a good place to lay down and put our feet up?

I wanted to stretch a bit before starting off and so Dora got a head-start on me for the afternoon. The afternoon was all road walking on gravel road, I really find that waking on gravel takes a toll on my feet much more so than dirt trail, so my feet were starting to feel tired towards the end of the day. It was also an extremely hot afternoon, once again I felt very thankful to have my hiking umbrella to attach to my pack for some hands-free shade and hat-free hiking.

I studied my maps and decided the topography at the end of this road was a good stopping place for the night. It was also at the base of a large climb and about 18 miles into the day, so it felt right. I was really happy to also see Half Mile and Dora camped there.

I don’t know how i’m always the last one out of camp, but I am. Last one out, last one in. At 7:30 a.m. that seems like an early start given that a.m. chores include eating and packing up my entire trail existence back into my pack, but everyone else seems to be out between 6 and 7 a.m. I need to work on that.

Today promised to be amazing, the topography put me up on the divide most of the day with several high passes to cross or mountains to skirt. But pretty much the whole day was walking through pine forests, great trail, but no view. Argh. I don’t mind a lot of climing and descending, but that’s largely because of the views i’m afforded at the top. There was one great panorama on top of Thunderbolt Mountain. I stopped to rest there a while and take in the view. Thankfully today was beautiful blue sky and the clouds weren’t building into storm clouds, so I happily descended Thunderbold Mtn without getting to know why it’s named as such.

The dining delight of this leg of the journey is yet another addition to the original lunch of a Pro Bar. It’s now a tortilla filled with a Pro Bar, 3 tablespoons of Nutella and new this week, topped with frito corn chips. Mmmm. I think it’s about 1000 calories, which in trail-land is good, the more the better in fact.

I was excited to arrive at Cottonwood Lake at about the 17 mile mark as on the maps it looked like a great place to stop for the night, a low point between Thunderbolt Mtn and Lightning Peak and I was hopeful I could take an ice-bath in the lake. My excitement was eaten, literally by a thousand mosquitos and figuratively when I arrived to see the ‘lake’ was mostly a swampy mosquito breeding zone. Argh. I kept hiking another mile or so and found a nice camp up a little higher out of the killer zone of the mini-vampires.

Nice peaceful evening, no sign of Dora or Half Mile though. I wonder how far ahead they got today?

As I was packing up camp, Half Mile came walking by. “Good morning”, he chimed in his usual friendly demeanor. I like Half Mile, such a gentleman. He had camped at the mosquito pond aka Cottonwood Lake, apparently it wasn’t so bad. We wished each other a happy hike and I carried on doing my morning chores.

Today was awesome! For so many reasons. Awesome!

A lot of the day was up on divide crossing fields of grass and flowers under a massive Montana sky. I love these days on the CDT! I had cell reception so called my parents to video chat and show them the amazing scenery. It was early morning in Australia, so it was their wake-up call. Thanks for picking up guys, great spot for a chat.

As if the day couldn’t get any better, I exited the trailhead to find Half Mile and Dora camped by the side of a road. There was someone else with them. Dora shouted out, “Do you want a beer and hot dog?”, huh? Well, hell yes I would! I rushed over, dumped my pack and was greeted by Bangarang offering a Moose Drool. Bangerang i’d actually briefly encountered when I was in Helena, I was walking down the street and a car pulled over, it was Bangarang, “Are you CDT?”, yes… “Do you need anything?”, wow, um, thanks but I think i’m okay, “Okay, flag me down if you see me around town and you need anything”. So here he was again now, with a Moose Drool and hot dog in the middle of the mountains at the end of an 18 mile day. Now THAT’S anticipatory service (Snowbird reference).

Bangarang is sectioning part of the CDT and trail angeling Dora. She was having a bitch of a time with her feet, and so he drove in to this trailhead to surprise her (and any other hikers lucky enough to be around). So here I was, middle of the woods, drinking a Moose Drool (happens to be one of my favorite beers) and eating a hot dog. Like I said, awesome day to be on the CDT! Thanks Bangarang!!!!! I slept well, although woke in the middle of the night to a coyote very close to camp yipping away, like they do.

So, confession time! Bangarang offered all of us a ride into Anaconda and we took it. It saved us a 25 mile road walk, 16 on gravel and the rest on pavement. He’d done it the day prior and said it was hell, big gravel pebbles sticking into your feet, one after the other, mile after mile, hour after hour… Given the choice between doing that in 80 degree heat or being in town for breakfast, we chose town. So we jumped in his car and were at the Classic Café an hour later eating pancakes and eggs and drinking coffee. Holden, who had passed me at lear jet speed a couple of days prior walked in while we were there, looked at us, scratched his head, sat down to join us for breakfast and got the story.

After a delicious breakfast in one of the most quirky breakfast cafes I’ve ever had the pleasure of eating, we jumped in Bangarang’s car and ran some errands… visiting the post office, dropping Holden off at the store etc. I got my resupply package, thanks Katie!

Update on the new shoes, they seem to be working out well. Only 50 or so miles in them, so a little early to say, but so far so good!

14 thoughts on “McDonald Pass to Four Corners (Helena to Anaconda)”