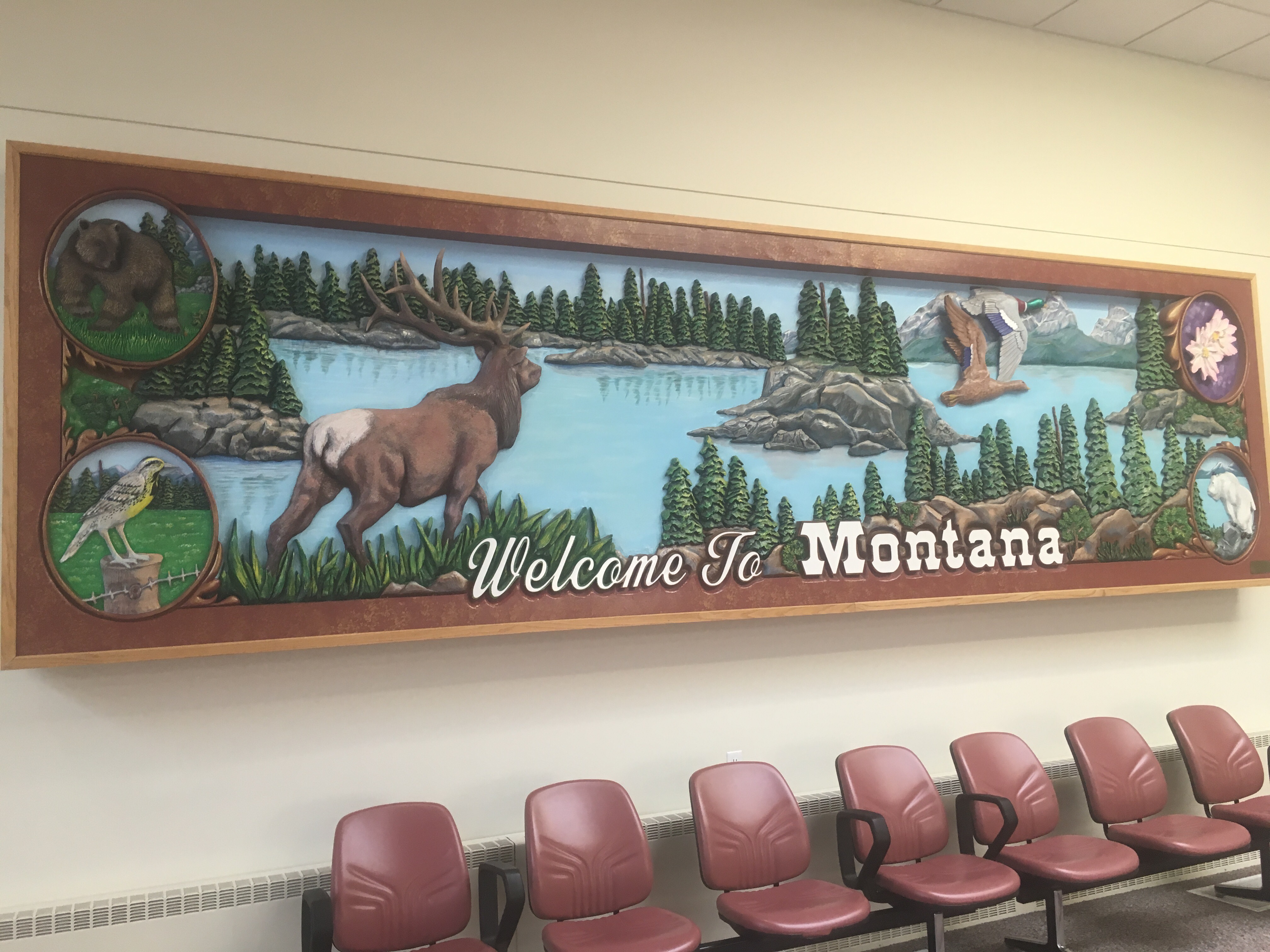 It’s finally time, time to start my journey on the Continental Divide Trail. I’m writing from East Glacier Park, Montana, the kind of town where kids ride their bike down the middle of the street with an unleashed dog happily prancing along and cars stop to let them pass, huckleberry everything is sold at the few shops and restaurants there are and the world’s largest purple spoon is on display as you enter the town, that’s right, largest purple spoon.

Getting out of the ‘real world’ was its usual battle, why are there only 24 hours in a day, and why don’t I remember to budget sleep time into those last few days? I flew up from Salt Lake City to Kalispell on Monday, having pulled an all-nighter on Friday at work and Sunday getting resupply stuff organized. I got a taxi into Whitefish and checked into the Downtowner motel, a funky little hotel off the main drag of the town. I walked a few miles around the gorgeous town, ate some ahi salad and drank a couple of cold beers at one of the town’s many pubs. I really like this town, reminds me a lot of Steamboat, Colorado where I lived for 5 years in my 20s. By the time I got back to my room I could hardly keep my eyes open. I fell asleep before brushing my teeth, with the television and lights still on. My alarm brought me back to the land of the semi-living 5 hours later. Time to jump on the Amtrak train and head into Glacier National Park.

Glacier National Park is bordered to the north by Canada’s Waterton Park and to the south by the very remote Bob Marshall Wilderness. Long before its discovery by white man, the plains to the east and valleys to the west were inhabited by the Blackfeet, Kootenai and Salish Indians. Miners and farmers displaced Indians and then the Great Northern Railway brought tourism. Many, including President Taft, recognized this as a very special place that should be protected for future generations, and in 1910 it became the 10th park in the US. Lucky us!

I had a hard time keeping my eyes open on the train, which was okay because it was overcast and so there were no sweeping mountain views to take in anyway. What I could see of the park, lush green pine forests and fast moving bubbling rivers, sure was pretty. I woke with a jolt just as the train was nearing the summit of Marias Pass, we were crossing the Continental Divide! I caught my first glimpse of the trail heading north to East Glacier before it dipped into a sea of dense green foliage and was gone. The conductor came over the load speaker “East Glacier Park, 10 minutes”. That’s my stop!

Standing on the train platform with my backpack on, holding my USPS bounce box of supplies, I was hit by a wave of reality. Oh my god! I’m actually here, this is finally actually happening. And then I wasn’t sure which way to go, so I just started walking towards the only road there was, followed it under the railroad track and popped out on Highway 2 and a short strip of businesses, the Glacier Trading Company, a couple of restaurants and a few motels. The wind was blowing hard, it was really cold and then it started raining on me. I walked up to a motel, it had a sign saying ‘Check-In starts at 3 p.m.’ on its locked door. I heard there was a hostel behind the Mexican restaurant, but it was closed until 5 p.m. A friend called at that point and all I could convey was exhaustion, freezing hands and wonderment that everything seemed shut, I huddled under a tree and was like “ahh, yeah Glacier is cool, i’m huddled under a tree on the side of a road, I’m having a hard time keeping my eyes open, it’s freezing cold, i’m getting rained on and I can’t quite seem to find a motel yet”. For those first 15 minutes wandering this roadside strip of businesses I think I was a bit lost, mentally speaking.

I sat on the bench outside the Glacier Trading Company and called another motel in town, “Yes, we have some cabins in the other part of town, we’ll come pick you up.” I looked at this 100 yard stretch of East Glacier and was interested to learn that the town had expanded to a second section a half mile or so away. John from East Glacier Motel arrived shortly later, I thew my pack in the back and was relieved to jump into his heated truck. East Glacier, part deux, is significantly larger, it’s maybe 200 yards long. It seems a lot more quaint than the first roadside stretch of East Glacier. We pass a sign saying Brownie’s Hostel, Espresso and Deli, then we pull into a grassy park across the street with a row of little cabins. This felt more like it!

I let myself into the tiny cabin, which boasted the selling points of heat and shower, and fell into the bed. I slept for about 4 hours. I woke feeling much better and back to my normal self.  A nice hot latte and huckleberry pie across the street and life was good again.

An enormous thank you to everyone that helped get me here, especially Katie who will be doing my resupply packages for me and will be helping me stay organized with the trip logistics side of things, as well as at work at Snowbird; the extremely wonderful team at Snowbird who do such a great job that I can get away to do this trip; Andrea at Canyon Sports Therapy Thanks Andrea and Canyon Sports Therapy for getting my motor control and gait issues fixed; Trover who gave me this harebrained idea in the first place, helped me get the last of my stuff done and made sure I got to the airport on time; and last but definitely not least, my family in Australia for genuinely supporting me in my increasingly bizarre quest for adventure.

12 thoughts on “The Adventure Begins!”