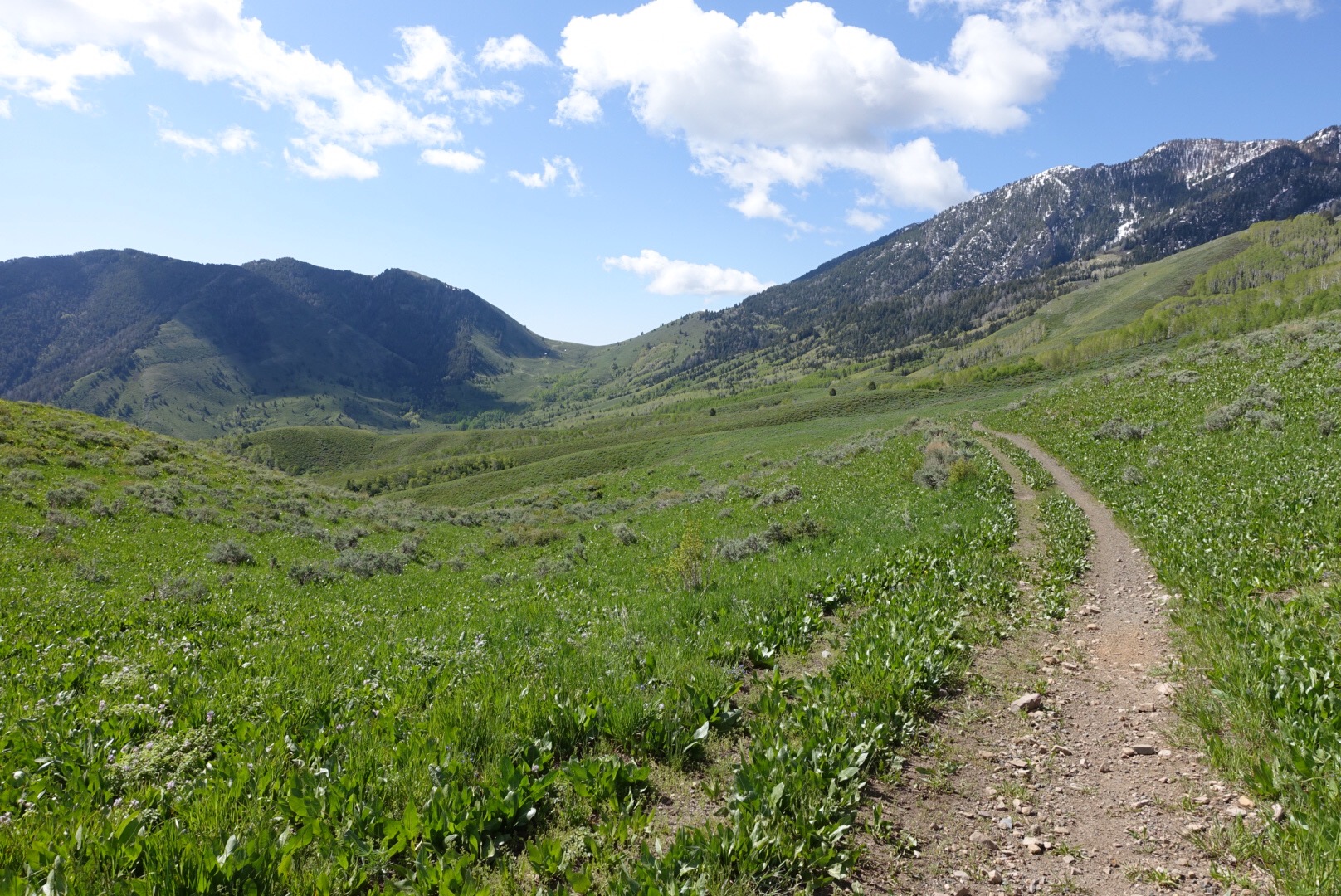 At 24 miles, 10 canyon/pass traverses and 8,000ft elevation gain, the Stansbury Front Trail (SFT) is an action packed weekend point-to-point hike. Highlights were watching the sun rise over the Great Salt Lake, getting pounded by a thunderstorm in the comfort of my tent, wildflowers everywhere, tons of solitude, a great workout and the massive and beautiful Hickman Canyon.

The Stansbury Mountains sit on the west side of the Tooele Valley and are part of the Wasatch-Cache National Forest. They were wilderness designated in 1984. The most well known and highest peak in the range is Deseret Peak at 11,000ft. The SFT runs from West Canyon in the north to Big Hollow in the south.

*In response to a comment I’ve added some more detail on the trail’s coordinates etc to the bottom of this post. If you’re doing recon on this trail, check out the gps info at the bottom and then read my response to the comment*

My plan had been to drive to the south end of the mountain range, park my car, and get a taxi up to the north end of the range. I had it planned out, or so I thought, with the Tooele Taxi Company, “Yep we can do that, just give us a call when you get to Tooele and we’ll dispatch a driver”. Well, I got to Tooele and gave them a call and the phone rang out and eventually went to a message saying the voicemail was full. When I reached the bounds of cell reception an hour later they still weren’t contactable. I was furious. Uber doesn’t service the area apparently, i’d tried that before coming up with the Toole Taxi Co plan earlier in the day. Out of options, I called a taxi to come out from Salt Lake City. For the nice small fee of $80 and an hour of waiting I could get my ride. The taxi driver told me I was the craziest person he’d ever met a few times during the hour or so long drive. His parting words, as he dropped me at the end of a long dirt road, in the middle of no-where, were simply,  “okay then, don’t die out there.” Ha.

I hiked in a couple of miles after the taxi ride last night and camped on a ridge overlooking the Great Salt Lake. Waking at 5:30 a.m. to this incredible sunrise reminded me why I love this backpacking thing so much.

I got packed up and on-trail by 7 a.m. I traversed 8 of the trail’s 10 canyons and passes today. Boy, was it a great workout. The trail was generally in good shape for the 10 miles north of South Willow Canyon. Being Memorial Day Weekend, a long weekend in the US in observance of those that have lost their lives serving in the armed forces, I was expecting a lot of traffic on the trail. Luckily for me, that was not the case. The main canyons of Davenport, North Willow and South Willow were vey busy with campers and ATV riders. The SFT is closed to ATV riders and so most of the mountain’s recreationists were on ATV roads in those 3 canyons. On the trail I saw a dozen dirt bikers, a horse group and 2 ultra-runners out for a training run. The sun was shining, flowers were out and the views over the surrounding desert landscape and Great Salt Lake were fabulous. Water was plentiful in Davenport, North Willow and South Willow and made for a nice light pack-weight of about 18lbs with food and water.

I hiked 13 miles and arrived on top of White Pine pass by about 6 p.m. I was in two minds about whether I wanted to camp somewhere here for the night or push on over Box Elder Pass and put in a few more miles. A new feature on my Delorme GPS unit is that I can request a weather forecast to the exact location i’m in. The forecast called for heavy rain and wind and so I decided to call it a day and set-up camp on White Pine pass. Good thing I did, because the heavens opened up not long after my tent was pitched and continued for many hours. There’s something so satisfying about being curled up inside a warm sleeping bag and watching while your tent handles getting slammed with wind and belted by rain.

I was on trail by 6:30 a.m. After a couple of miles I reached Box Elder Pass, the trail’s high point at 8,370ft. There were a few snow drifts to cross, but nothing some kick steps didn’t take care of. I ate breakfast on top of the pass and took in the incredible views. On one side a great view of Stansbury Island in the Great Salt Lake and on the other the massive expanse of Hickman Canyon.

The first 16 miles of the trail traverses rocky passes along the front of the Stansbury Mountains, one after the other in quick succession. I was expecting more of the same to the end of the trail. Hickman Canyon took me completely by surprise. One of my very favorite things about backpacking is the anticipation of what is over the next ridge. It’s times like what i experienced heading into Hickman Canyon that fuels the fire. It was a massive canyon that took more than 5 miles of meandering trail to cross. It…. was…. so…. beautiful! Everything was bright green, wildflowers were sprouting everywhere, the sun was shining, the sky was blue. I felt like it was the set of the Sound of Music and I was Heidi.

After hiking up the other side of the canyon and over Hickman Pass, the last few miles were all downhill as the mountain range dropped away into the desert floor. I arrived at the Big Hollow Trailhead and my car at about 1:30 p.m. Realizing I had plans later that day, I took the opportunity to clean up in a nearby cattle trough.

A wonderful 48 hours in the Stansbury Mountains!

Here’s some additional info on the trail if you’re planning a trip:

Useful site: http://www.tooelecountytrails.com/stansbury_front_trail.html, although i found the mileage and definitely the gps coordinates to be off.

Here’s where I started on West Canyon road, this was about .5 mile from the start of the SFT:

Here’s where I finished at the Big Hollow Trailhead (i was parked about .25 mile from the TH):