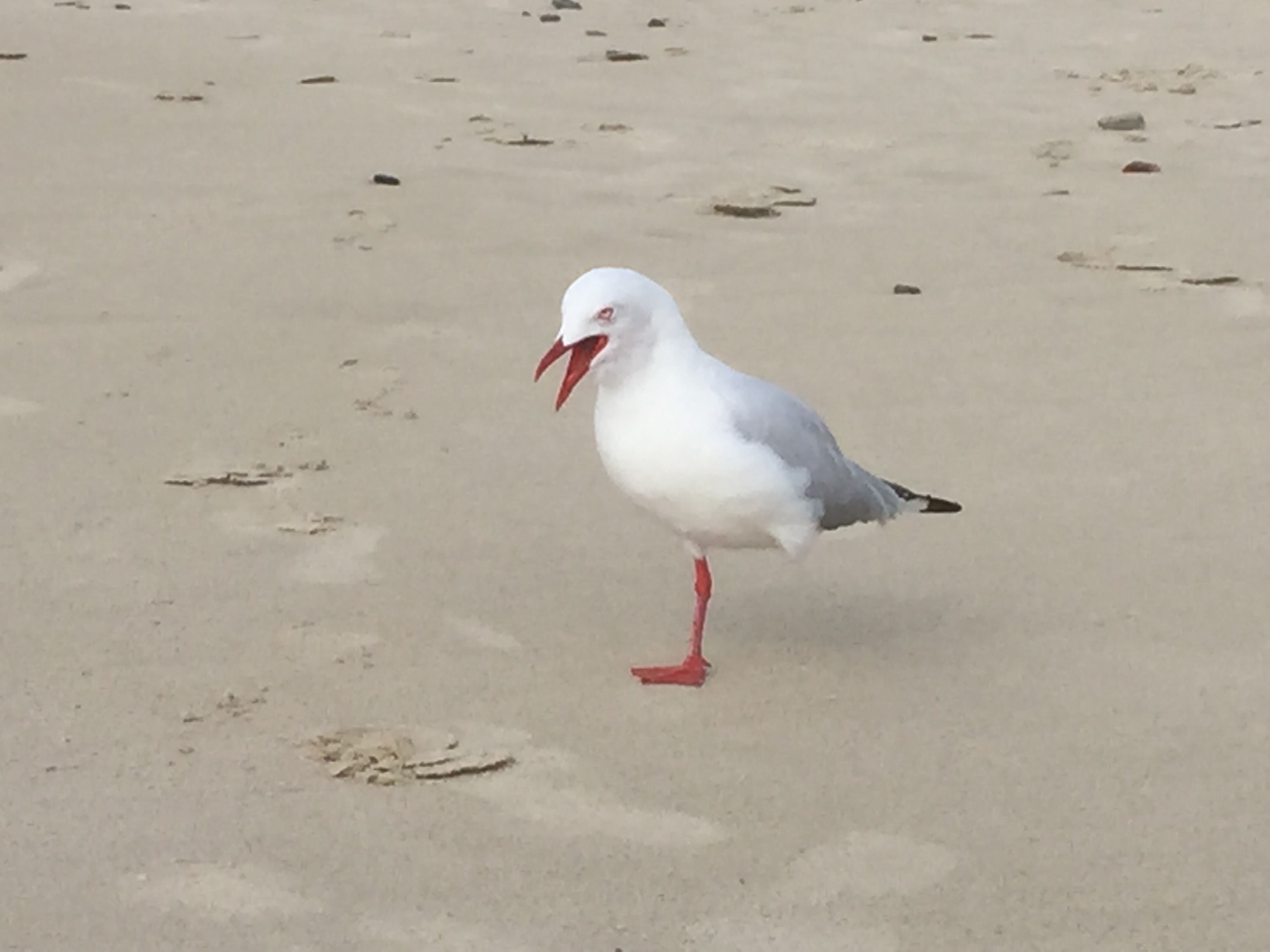 After hearing the news that my hike on the Continental Divide Trail was over for the summer, I jumped on a plane to Australia and surprised my parents by arriving at their house unannounced. They were pretty shocked because I’d talked to them about 30 hours earlier from New Mexico and had told them I was headed back home to Salt Lake City. Ha!

It’s been a great couple of weeks of family time. It was very nice having Mum and Dad to keep me fed, entertained, and off my leg. Thanks guys! My bother Sam even came up for 4 days from Melbourne!

The newest addition to our family is 6 month old, Arnie. Such a cutie!

My Aussie home is on a farm in the Byron Bay Hinterland. We also have a small resort on part of the property, so if you’re ever in Australia you should put it on your list of places to stay! Get in touch and we’ll give you the family and friends rate! Here’s our website:  Byron Hinterland Villas and some pics:

I’ve spent a lot of time laying on the beach watching the waves. It really helped me to clear my head and do some thinking about what has happened and how I want to move forward.

If i could pick anyone in the world to discuss the topic of success and failure with, Sir Richard Branson and Anderson Cooper would both be on the list.

I read Losing My Virginity, Branson’s autobiography, my first year in business school. I admitted him into my circle of influencers immediately and have been inspired by him ever since. It wasn’t too long after reading his book that I embarked on my first solo adventure, I took the summer off to travel to the USA. I spent a month traveling the western US via Greyhound bus and youth hostel, and then a season living and working the ski bum life in Steamboat Springs, Colorado. Wiithout realizing it at the time, taking that trip definitely set my life off in a new direction.

But back to Sir Richard, I am as impressed by the story behind how he built the Virgin Group, as I am about his incredible fascination with adventure. After all, who decides to ride a hot air balloon across the Atlantic or kiteboard the English Channel? Much less build a spacecraft and submarine with thoughts of one day running commercial trips into space and to the depths of the ocean!

Anderson Cooper is a journalist, writer, television personality, and anchor of his own news show AC360 on CNN. I read his book Dispatches from the Edge- A Memoir of War, Disasters and Survival 5 or so years ago and his reporting style, sense of humor, and life-story captured my interest and has held it since. This week i’ve been reading Getting There- A Book of Mentors, in which he has a chapter on success, and the failures he encountered getting there. Anderson had a privileged upbringing, being part of the Vanderbilt family, but experienced his share of adversity in his youth and rejection in getting started in the news world. His success as a foreign news correspondent came through failure, perseverance, innovation and determination. He was strong enough to absorb rejection and criticism by believing that there’s No Plan B and adopting an attitude of ‘if at first you don’t succeed, try again, much harder.’

So naturally I wonder what these two influencers over my world would say to me if they had been following my blog and discovered that despite 9 months of relentless planning, late nights and considerable expense, I had fallen on my face right out of the starting gate in my attempt to hike across the country on the CDT? Laughed a little maybe? I am able to do that now, It’s pretty funny actually, ALL of that lead up for 110 miles of hiking and a stress fracture in my tibia.

To continue a little with the fiction that either of them would actually read my blog, if Branson had laughed a little, I like to think he would have chased it with one of my favorite quotes of his: “Take your own route. If you fall flat on your face, at least you’re moving forward…”. Here’s some of my other favorite quotes of his that enable me to laugh at the situation:

I think Anderson would tell me that if the goal was something I really believed in doing, then I should pick myself up, figure out why I failed, and try much harder next time. Here’s one of my favorite quotes from Anderson on success:

So, what was I trying to achieve and did I fail?

To say I’ve hiked from Mexico to Canada? Would have been cool, ha, but not the point at all. To hike the 3,000 mile CDT? Well yes, but that is more the means to achieving the goal. To spend my days hiking, discovering, experiencing for such a long time that living like a nomad in the wilderness feels completely normal while the idea of regular life in civilization seems completely foreign? Yessssss, yes, absolutely, that is what it’s all about for me!

Did I Fail? Totally. I spend my time in the real world crunching a lot of numbers, so of course I want to put a statistic to my achievement… 110 miles of 3,000 miles is a very lousy 3.6%. I barely detached from the real world, let alone lived the life of a nomad. Had I hiked 1500 miles, I might have felt fulfilled in my goal, but 110, no, not even a start.

So then, what caused me to fail and if I try again, is it avoidable?

I’ve spent some time and money understanding the answer to these questions! In a nutshell I suspect that I got a stress fracture in the left leg because it was not in good enough shape to do what was being asked of it.The extended answer is that unbeknown to me a twisted ankle a year ago changed my walking gait, which later caused my knee pain, I saw a doc to treat this but the changed gait went un-diagnosed, everything we tried for the knee failed, until I saw a physical therapist who quickly diagnosed that a bad gait was causing my knee pain, and the bad gait was caused by my ankle moving incorrectly. It was a race against the clock with a month and a half to go to get my ankle working properly and walking gait re-trained. I spent hours a day doing strengthening and range of motion exercises and very quickly I was knee pain free. I moved on to hiking as much as possible with a loaded pack and a couple of weeks before departure my gait analysis showed I had achieved a successful rehab. We were really confident of a successful hike! However the CDT and some of the variables I encountered in the first few days are so far from almost any normal backpacking conditions that it was just too much too soon for my poor leg. The muscles and tendons weren’t strong enough and my bone took the brunt of it until a stress fracture developed. This theory sits well with me because my right leg did fabulously, in fact it probably picked up a lot of slack for the left leg, and did so without so much as a sore muscle.

Is this injury avoidable if I try again? YES! Assuming I take my time the next few months and properly rehab this leg, there’s no reason I won’t be back to my usual ‘horse legs’ self by the fall. I may sustain a different injury, that’s always a big wildcard in doing something like this, but the circumstances leading up to the hike won’t be the same and so I still believe I’ve got a real shot at doing this.

I’m going to return to the CDT and try again next spring! Yay!!!! Another 10 months of excitement and preparation are ahead of me! Obviously there’s nothing I’d rather be doing than hiking the CDT right now, but there’s far worse things my mind can be focusing on than getting excited for what’s going to be an adventure of a lifetime! Also on the upside, I’ve got all of the logistical and gear planning done! I really think I nailed both of those and need to do very little to be ready for next summer. My whole focus for the next 10 months will be getting my leg strong again and my whole body in the best shape possible. Which sounds like a pretty fun thing for me to be focusing on… waaaaaay more fun than all the gear and logistics planning I went through last time! When I do finally make it back to the trail next April, imagine how much more I am going to appreciate being there and hiking injury free!

My blog will go silent for a few months now. I fly back to the US tomorrow and back to work at Snowbird on Friday. I expect to be off crutches and out of the boot by mid June, then gradually building back that leg’s strength through July. I hope to do some fun backpacking adventures in late August and September. When I do I shall share them with you. Until then, have a great summer, or winter for my Aussie family and friends, and please send happy tibia healing vibes my way!

One last quote before I sign off. A good friend and manager on my team emailed me this great Bruce Lee quote after he learned of my injury and subsequent disappointment in having to pull off the trail:

Thanks for joining me on this adventure! To be continued…

8 thoughts on “Success, Failure and What’s Next…”