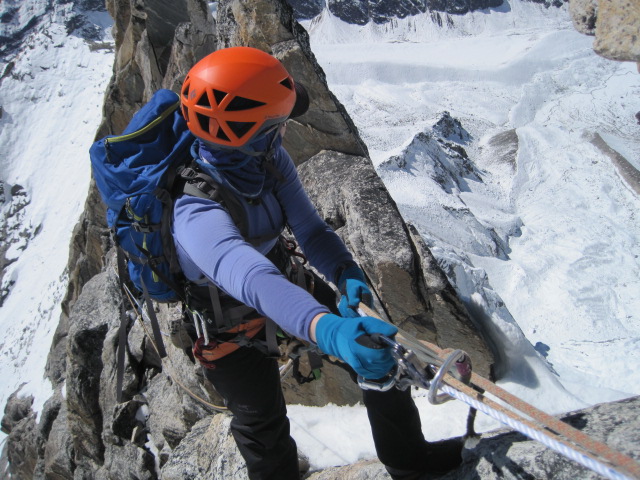 In 2013 I spent 6 weeks in Nepal attempting to climb Ama Dablam, one of the most beautiful mountains in the world.  A cyclone near India caused a 20 year storm and prevented a summit attempt. But climbing to Camp 2 at 20,000 ft was still an incredible experience and pushed me to new limits.

Ama Dablam at 22,500ft is a technical expedition peak. Usually the climb takes 2 weeks because you make a number of trips up from Base Camp to Camp 1 and Camp 2, before the final summit push. The multiple trips are necessary to move your gear up, and also so that the body can acclimatize. An estimated 2000 people have summited this beautiful mountain, and about 20 have sadly perished trying. I was here to climb to the summit, guided by Nima Sherpa to keep me safe!

Lots of down time waiting for the weather as the ’20 year storm’ had hit just a couple of days before I arrived dumping feet of snow onto the mountain… I killed time reading books on my Nook, hanging out chatting with others in the expedition, eating Pringles, drinking milk tea and looking up at Ama Dablam. The expedition also had a monk perform a traditional Buddhist ceremony, a Puja, to ask the mountain gods for safe passage to climb the mountain.

Base Camp to Camp 1

BC to C1 was a snow walk/ snow/rock scramble. Ordinarily it is dirt and steep scree and some rock scrambling, however the storm changed the experience significantly. I went to C1 twice, once to just below C1 to carry a load of gear and to acclimatize; and then a second to stay for two nights and push up to C2.

C1 to C2 was beautiful technical rock and snow climbing. The crux of the climb being the Yellow Tower just below C2 at 20,000ft with beautiful 5.8 rock. Tho whole route was incredibly exposed, with thousands of feet of crisp Himalayan air below my heels. It was really, really incredible. Climbing 5.8 at that elevation, with a pack and in mountaineering boots is an entirely different experience to doing so at home with a pair of climbing shoes. And the views…. oh the views! Thanks Nima for taking my camera and snapping all of these fantastic images. Camping at C1 for a couple of nights was very cold, a little uncomfortable, but one of the most picturesque places I’ve ever spent time. It was a little unnerving hearing the avalanches thunder down from the Dablam above C2; we were further down the ridge out of exposure, but it solidified the reality that the storm had caused very unstable and unsafe conditions above C2.

After returning to BC from C2, it became a waiting game. The sherpas climbing ahead to put in the fixed lines above C2 could not push forward due to avalanche risk and deep snow. Then forecasts of 100 mph winds for the next few days brought everyone back to BC. My window had now closed and the summit wasn’t going to be mine. It was disappointing but it’s also the reality of mountaineering, very often you come away without a summit. So, Nima and I packed up and trekked up the Gokyo Valley instead, you can read all about that very awesome adventure in one of my trekking blogs.

Here is a short video a friend of mine, Tom Rogerson, put together on the climb: https://vimeo.com/84957402. Thanks Tom, great video!

Thanks to my friend Dean for organizing this ridiculously incredible trip for me! Check out his adventure travel business at: wwtrek.com